Karrion Kross is a professional wrestler from America who is currently signed to WWE. He has been wrestling for WWE since 2021 under the brand Raw. Before he also performed in the NXT Championship Reigns for one year. He is a 2 times NXT Championship winner winning it on August 22, 2020, and April 8, 2020.

Who is Kross? His Bio and Early Career

Kevin Kesar, famously known as Karrion Kross, was born on July 19, 1985, in New York City, United States, and his zodiac sign is Cancer. Besides his original name, he is also known as the Killer Kross ad The White Rabbit. He is a quite closed person if we consider his background details. The information regarding his father and mother is still under the radar. He has never talked about his family and early life in public as well as in the ring. Also, information about his siblings is still a mystery.

But one time, he has shared a photo of his father where he was holding the baby picture of Kross and his friends. It was on November 6, 2019, he wished him a happy birthday saying, "Happy Birthday Pop". Also, he was very closed with his grandmother whose name is not revealed yet. He said that,

According to him, he grew up in old New York City as well as Brooklyn.

How tall is killer k? His height and weight

Regarding his physical appearance, Killer Kross stands 6 feet and 4 inches and 193 in cm tall and weighs 120 kg (265 pounds). He has a muscular body full of tattoos on his right-hand side. He has brown hair with a small beard.

Read:- How tall is Dominik?

How Much is Karrion Kross's Net Worth In 2021? Salary & Contract at WWE

He currently wrestles in WWE, which pays him a pretty good amount for a wrestler. WWE is the highest-level wrestling brand that pays good wages comparatively. Although it is not officially released, how much is he paid in WWE. According to sources, earns around $300,000 per year in 2021.

So, Karrion has an estimated ne worth of $4 million. He has made different sources of income.

The highest-paid WWE Wrestler is Brock Lesnar, who earns $12 million. He is followed by John Cena and Roman Reigns who earn $8.5 million, and $5 million respectively. So, WWE wrestlers can earn varying between several thousand and even a couple of millions.

Besides, his earnings at WWE, he also earns a massive amount from other sources. He also has merchandise where he sells shirts and other stuff under his own brand. 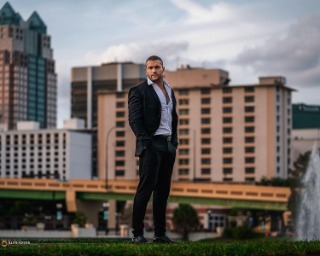 He lives a luxurious life with his girlfriend in the US. He frequently posts his picture and shows his lifestyle on his social media.

The 2020 NXT Championship winner is not just a WWE wrestler and is a business-minded person. He has best utilized his own brand value and utilized it to land various partnerships. He has very sponsors affiliated with him which he has shared here.

One of his major sponsors is Ryan Loco, who is a professional photographer based in South Florida.

It has also photographed other famous celebrities like Conor McGregor and, Mike Tyson, Justin Bieber and many more.

He also supports another tattoo brand named Blue Note Tattoo which is a Tatto Studio based in Las Vegas.

Probably, it must be the same tattoo studio from where he has drawn in his body.

Being himself a Gym Freak, he has a partnership with the Gym Wear brand named Otomix. Otomix is a manufacturer of Gym accessories especially shoes, shorts, bottles and hoodies.

His other sponsorship deal is with Rio Tan Las Vegas, which provides services including Spray and UV Tanning, Red Light Therapy, CryoTherapy.

Other services like Normated Compression Therapy and Hydromessage in a package system. The package may vary between hourly t monthly as per the flexibility of customers.

His partnerships are not limited to the above-mentioned only. He has others with different categories.

Not limited to sponsors, he has his own merch where he sells different accessories under the brand name Killer Kross. 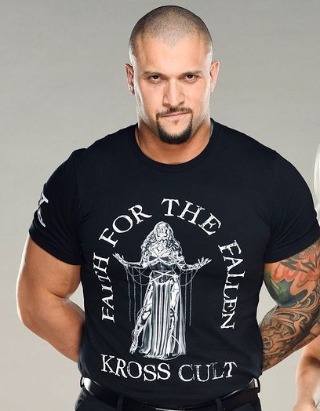 Most of his sold items are shirts. If we explore his Instagram, we can find his promotions of these shirts.

If you want to explore yourself, click Killer Kross's merchandise.

Know About Killer K’s Love Life || Is he engaged?

The White Rabbit aka Karrion Kross is currently dating his longtime girlfriend Scarlett Bordeaux. The couple has been dating for more than 4 years and has been together both in daily life as well as in professional life. 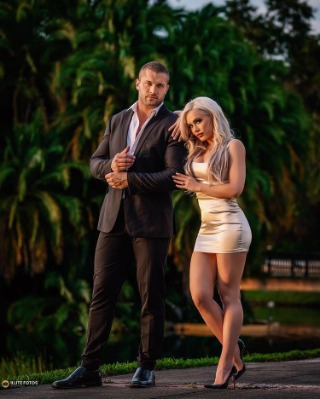 Read also:- Who is Damian Priest dating? (Affair and Girlfriend)

The couple has not limited their relationship to boyfriend-girlfriend only. Particularly, they have already announced their engagement. Though they have not revealed when or where they will be marrying, but they must have already made their decision regarding marrying each other.

For his love Scar, he once wrote,

"Never more than ever today;
I find myself more thankful to have those closest to me in my life.

From friends to family- to the love of my life;
Everyday she naturally and lovingly completes a task at keeping me focused & grounded in a state of genuine gratitude for all things occurring in my life."

Are Scarlett and Killer Kross engaged?

Yes, the wrestler couple is currently engaged and must be planning on marrying. The date of their engagement is not sure but Killer's fiancee Scarlett posted a photo on September 24, 2021, where she revealed that they were engaged. 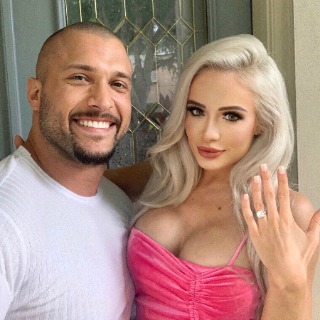 In that photo, she was seen with her fiancee Kross with her engagement ring on her finger. And she captioned,

And below she highlighted an important thing saying #Isaid Yes. It means Kross was the one to propose and Scarlett definitely agreed to marry.

Who is The White Rabbit's fiancee Scarlett?

Killer Kross's fiancee Scarlett is also a professional wrestler who also performed in WWE under her ring name. Besides wrestling, she is also a ring announcer and a model

Her original name is Elizabeth Chihaia and was born on May 13 of 1991. She comes of Romanian descent where her grandfather was originally from. She is also a degree holder in musical theatre at Columbia College Chicago.

She is also an active Instagram user where she posts photos of her daily life and her profession. It is full of her cute photos in different styles. Fans can't be expecting less from a model and a WWE female Superstar. Her Insta Id is @realscarlettbordeaux and has more than 600,000 followers.

Besides, she is also definitely a supporter of her future husband in terms of profession and business both. In fact, she is also seen promoting her fiancee's merchandise. on different occasions.

One thing common in the couples Instagram fans can notice is both has real tag before the user name.

Read:- Know About Theory’s Dating Life and Relationship Status in 2021

The Poetry of WWE wrestler Kross

If anyone is a great fan or even a normal fan of the 2018 Rising Star Award winner, then he/she can easily notice his interest in Literature.

Besides his regular posts on Instagram, he frequently writes long posts displaying his poetic nature and skill. One of the short demo on his website is,

Killer Kross is highly active on Instagram with the username @realkillerkross. It has more than 300,000 followers.

The 2 times NXT Championship winner regularly posts and gives updates about his life to his fans.

His youtube channel name is Killer Kross which has more than 9,600 subscribers with more than 200 videos.