Julie Wilson is popular as the wife of an American football coach and former quarterback Kellen Christopher Moore, who is the current offensive coordinator of the Dallas Cowboys of the National Football League. The love birds have been married for almost ten years.

Julie was born in the mid-1980s. Julie is yet to share her exact birth date with the media. She likes to keep her personal life away from the reach of the public. There is not much about her early life and siblings information shared. Julie graduated from Prosser High School.

Julie Wilson has been married to her high school sweetheart, Kellen Moore. The love birds first met each other while both of them were studying in their High School. Julie was in her senior year, and Kellen was in his sophomore year when they first became friends with each other. It did not take long enough for this friendship to turn into a relationship. 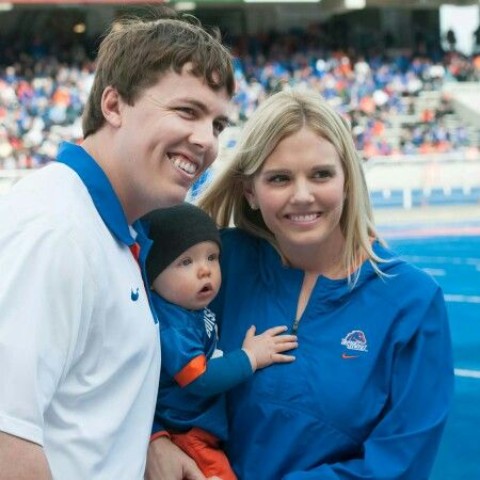 Julie Wilson with her husband and child SOURCE: Pinterest

Julie and Kellen were from an athlete family. This made easy access for them to spend time with each other.  Julie was a 3 sport athlete and also a class valedictorian. Julie is yet to utter a single word about her personal life after graduating from High School.

The love birds walked down their wedding aisle on July 23, 2011. They had a private wedding ceremony where only a few members from both the families and some close friends attended the ceremony. The dua dated for some time before tying their wedding knot.

Soon after the wedding, The pair welcomed their first child, a son, Kyler, in August 2014. Then shortly after that, they were blessed with a daughter, Hallee. The family of four seems to be living a happy and peaceful life. As Kellen remains away for his work, Julie remains at home looking after their children.

Julie is living a happy life through her husband's successful career. Ileana Salas and Tiffany Orlovsky are two famous WAGS living a peaceful life. There is not much information about her economic career with the public. 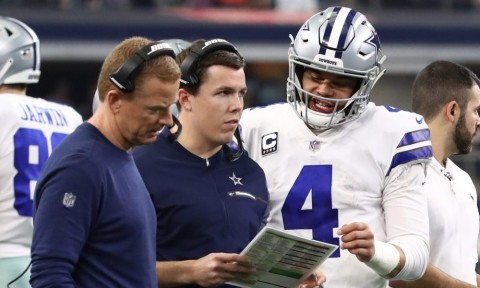 Julie's husband, Kellen Moore, has an estimated net worth of more than $1.5 Million. He has accumulated most of his net worth through his successful career as an American football player. Moore did not have a good career, unlike other players. He has started working as an offensive coordinator with Dallas Cowboys.

Kellen started playing American football from his High School. He was a high-prospect young player. He was also a Third-team All-state selection as a junior. After graduating From High School, Kellen enrolled in Boise State University and played with its team. Moore was ranked as the 37th best-returning player in college football in 2009. He finished his University as the top prospect in American Football.

In the 2012 NFL draft, Kellen was not drafted immediately, but Detroit Lions singed a post-draft. He played with the team until 2015. In 2015, He signed another three years contract worth $1.825 Million. However, it was soon released.

Kellen then singed with Dallas Cowboys had ups and downs in his career until 2018. He announced his retirement in 2018 and was recruited as a quarterback coach by Dallas Cowboys. In December 2020, There have been talks about Kellen's appointment as their head coach.