Juli Boeheim is a well-known American businesswoman. She is the wife of American college basketball coach Jim Boeheim, the Syracuse Orange men's head coach. They have been married for more than two decades and have three children together.

Juli Boeheim was born Juli Greene on March 5, 1966, in Miami, Florida. She came to the limelight only after her successful career so, there is not much information about her early life. Juli's family moved to Kentucky shortly after her birth. After graduating from High School, Juli enrolled at the University of Kentucky. She holds an American nationality and follows Christianity.

Juli tied her wedding knot with James on October 10, 1997. They had been dating each other for more than two years before their marriage. The love birds first met each other in 1994 at a party at the Kentucky Derby in Lexington. It did not take this friendship to turn into a relationship and to marriage. 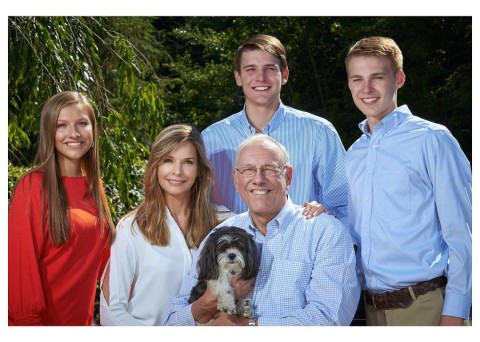 Juli with her husband and children SOURCE: [email protected]_foundation

Soon after the wedding, Juli and James welcomed three children, Jimmy, Jackson, and Jamie. Jack and Jamie are twins. All of her children play basketball at the collegiate level. It's been more than two decades of their marriage, and there have been no rumors of the couple having ups and downs in their marriage life.

Although this may be the first marriage of Juli, her husband, James was previously married and is divorced from his first wife, Elaine Boeheim. James and Elaine tied their wedding knot in 1976 in Lyons, New York. In 1993, the couple adopted a daughter Elizabeth. For some personal reasons, they decided to divorce and move on.

In April 2022, Juli and her husband Jim made their apperance to in-person event for first time since 2019.

Juli is a businesswoman. She must be earning a handsome amount from her business. She has not shared a word about her earnings in the media. Juli must be enjoying her husband's successful career in college basketball and is one of the wealthiest basketball coaches in the states.

James Boeheim has an estimated net worth of more than $12 Million. Also, he has an annual salary of $2 Million. In 2019, James was the highest-paid college basketball coach with a $2.2 Million salary and received an extra $260,000 as his bonus.

Juli and James run a non-profitable foundation whose main goal is to enrich the lives of kids in need within our Central New York community, as well as provide support for eliminating cancer through research and advocacy.”They have been able to raise more than $4.5 Million through the campaign.

Career in NBA and College Basketball

James has been working as the head coach of Syracuse University since 1976. He is the longest-serving head coach for any team in American college basketball history. James holds several unmatching records to his name. Boeheim has served as the chairman of the USA Basketball several times.

James was inducted into the Basketball Hall of Fame in 2005. In 2015, Boeheim announced He would retire in 2018, but after his son decided to play with Syracuse, James has extended his contract until he takes any other decision.