Joshua Buatsi was born on March 14, 1993, in Accra, Ghana. He is among the four children born to his parents. He has three siblings Jacob, Janet, and Loretta. Buatsi's family moved to the United Kingdom in his early days. Buatsi graduated with a 2:1 degree in Management with Sports Science from St Mary's University. Joshua stands six feet and one inch tall and weighs 81 kg.

Joshua started training boxing from a very early age. He started competing as an amateur at the South Norwood and Victory club, Charnwood Road, Crystal Palace, London, England. Bustasi started training with Terry Smith. After completing amateur tournaments, Joshua made his professional debut in July 2017 against Carlos Mena. He won the match via TKO in round two.

Buatsi competed in three matches in 2017 and won all of them. Coming into 2018, Joshua fought for his first title, vacant WBA International light-heavyweight against Andrejs Pokumeiko. He eventually won the match in the first round via TKO. Until 2018, The player retained his title twice. In March 2019, Buatsi got another chance for the vacant British light-heavyweight title against Liam Conroy. He eventually won the match in the third round via TKO. 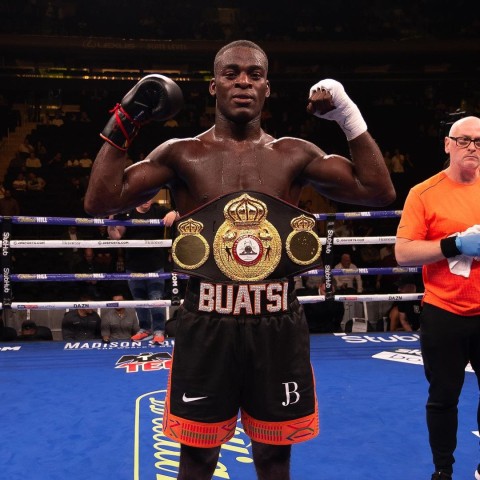 CAPTION: Joshua along with his WBA title SOURCE: [email protected]

Joshua must have received a reasonable sum through the English government. He has represented the country in numerous international events.

Joshua is at the peak of his career. He must be focusing on his career rather than spending time with new people. His Instagram of 106k followers is filled with photos of his games and training. He is very close to his family and spends his free time with his family and friends.