Joseph Dennis Parker is a New Zealand professional boxer who won the WBO heavyweight title from 2016 to 2018. Earlier, he held multiple regional heavyweight championships including the WBO Oriental, Africa, and Oceania titles; as well as the PABA, OPBF, and New Zealand titles. He is ranked the world's 8th best active heavyweight by The Ring magazine as of December 2020.

South Auckland, New Zealand native, Joseph Parker was born on 9th January 1992, under the star sign Capricorn. He is the son of Dempsey and Sala Parker. He began boxing when he was 11-years old. The twenty-nine years holds a New Zealander nationality and is of Samoan heritage. He stands 1.93 m (6 ft 4 in) tall.

To start: it's no secret that the major source of income for professional boxers is from competing in the ring. Boxers typically earn a split of the “fight purse” for competing in a boxing bout. Like other athletes, the boxer has sponsorships and endorsements.

Defeating Hughie Fury at Manchester Arena, he earned £1.1 million on 23rd September 2017. Further, on 31st March 2018, Parker faced Anthony Joshua. The total purse for the fight pay-per-view hit around £24 million, earning Joshua will £16 million while Parker a career-high of £8 million.

As of 2021, Joseph Parker has an estimated net worth of $5 million.

Joseph Parker's Wife: Is He Married?

Joseph Parker has been in a relationship with Laine Tavita for a long time now. The duo started dating in their high school days.

In early October 2016, Parker and his partner, Laine Tavita announced that they were expecting their first child. In November 2016, during camp for the Ruiz bout, Joseph and Laine Tavita welcomed their first child, a daughter they named Elizabeth. Parker was not present when Tavita gave birth to their daughter, named after his sister and his mother, as he was in Las Vegas preparing. 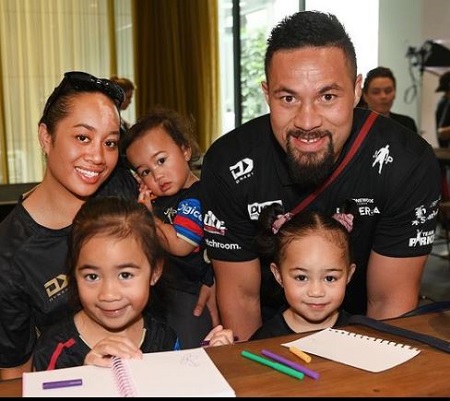 Soon, the new mama and papa moved into their first shared home. Before, they'd both been living at their parents' homes, with Laine working in the 2 Degrees head office.

In July 2018, they had a second daughter, Shiloh Jasmine Parker, and their third daughter, Michaela Florence Parker was born on 25 May 2019.

Parker turned professional in July 2012 with Duco Events in Auckland, beating Dean Garmonsway via TKO.  After defeating Andy Ruiz on 10 December 2016, for the vacant WBO title, he became the first heavyweight boxer from either New Zealand or the Pacific Islands to win a major world championship.

Parker reached a peak active heavyweight ranking of the third by the Transnational Boxing Rankings Board, during his reign as WBO champion.

In his most recent fight, he won WBO Oriental heavyweight title against Junior Fa on 27th February 2021. With the win. he compiled twenty-eight wins in a total of 30 fights.