Jose Calderon is a retired basketball player from Spain who played as a power forward for NBA and other leagues too. In NBA, he played for Detroit Pistons, Atlanta Hawks, Los Angeles Lakers, New York Knicks, Dallas Mavericks, and many more.

Villanueva de la Serena, Spain native, José Calderón represented his national side in various tournaments and won a FIBA World Cup title in 2006, 2X Olympic silver medals in 2008 and 2012, and a bronze medal at the 2016 Summer Olympics.

Jose Calderon's Net worth and Endorsement

Jose Calderon has an estimated net worth of around $35 million, as of 2020. He made a tremendous sum of money from his professional basketball career. His NBA career earnings with his playing career are reported to $84,201,469 in his 12 years career from 2007-2019.

Earlier,  he signed a four-year contract with Dallas Mavericks for $28 million. The annual salary was reported to be $7 million. 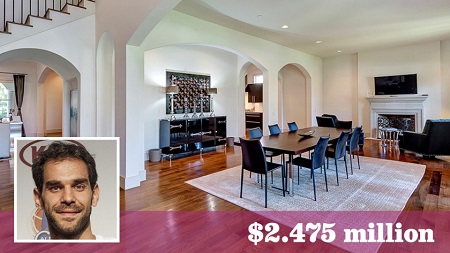 Jose is Spanish by nationality and belongs to white ethnicity. He married his long-time dated girlfriend, Ana Hurtado in 2003. The husband and wife welcomed their first child on May 23, 2010, Manuel Calderon. 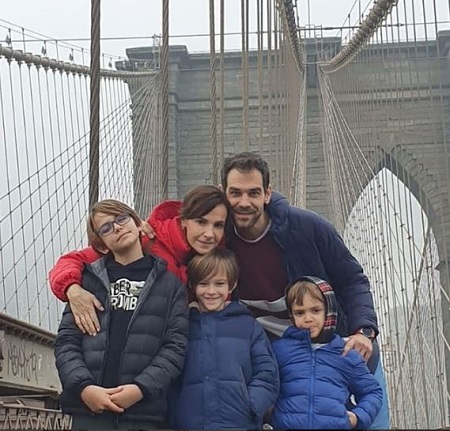 José Calderón with his wife and children SOURCE: Instagram @jmcalderon8, posted on DECEMBER 15, 2019

The couple has been living together for approximately fifteen years and to date, they share a happy married life. Besides, the couple was involved in the development of children and youth in the most undeveloped areas of the world.

Moreover, the pair has also maintained their relationship very strong.  Apart from his current relationship, he has no past affair and relationship.

Recently,  Jose attended his brother's wedding ceremony and uploaded a picture of their wedding on Instagram. He captioned it, 'A very special day with my brother on the day of his wedding with Clara.

Jose Calderon was born on September 28, 1981, in Villanueva de la Sarena, Spain, as the son of Sr. Jose Calderon and Lola Borrallo. His father is a former basketball player of his hometown team, Doncel La Serena.

At the beginning of his playing career, Jose joined his hometown team, Villanueva, where he started playing basketball. While he was playing for this team, he led his team to the Junior Team Championship title.  After that, he was called to play with a professional basketball team. His professional career began in his native country with Tau Ceramica in 1998 played for the team until 2005.

The 6 feet 3 inch tall, the basketball star Jose made his professional basketball career debut with the Toronto Raptors in the National Basketball Association (NBA). In the beginning, he struggled with his shooting but at the end of 2005-06 seasons he ended up playing 64 games averaging 5.5 points, 2.2 rebounds, and 4.5 assists.

Calderon played with Toronto Raptors for almost eight seasons and was traded to Detroit in 2013. In the same year, he left Raptors and signed with Dallas Mavericks under a four-year contract of $28 million. However, a month later after signing with Dallas, he was traded to New York Knicks, LA Lakers along with Jerian Grant, Robin Lopez, in the exchange of Derrick Rose, Justin Holiday.

Subsequently, in July 2017, he signed with the Cleveland Cavaliers and thenceforth, he has been playing with its team.

Previously, he played for Cleveland Cavaliers alongside popular basketball players such as LeBron James, J. R. Smith, Kevin Love, Kyle Korver, and so on.

Upon retirement as a player, he joined the NBA as the special assistant to the executive director for the 2019–20 NBA season.