Kevin Wesley Love is an Olympic gold medal winner for the U.S national team in 2012. NBA forward and center player for Cleveland Cavaliers is best known for his three-point shot and tough rebounding. He trained under the mentorship of Hall of Fame center Bill Walton at UCLA and also won the NBA Championship with the Cavaliers in 2016.

Income and Net Worth of Kevin Love; How much is his Salary?

Mental health and finding a therapist. Iconic 2016 Finals moments. Why I think Stephen King is a G. All in a recent article with @gq. (photo cred: @gq @matteomobilio )

Love is a very good investor and ambassador. He has invested his capital in lifestyle website 12s Society and is a style ambassador and campaign model for the Banana Republic. Kevin also has an endorsement deal with the Chinese shoe company 361 Degrees.

Furthermore, Kevin Love owns a house in Bratenahl. He also has a luxury car collection of over $4 million which consists of Audi, Bentley and many more.

Personal Life of Kevin Love; Who is he Dating currently?

The NBA player is currently in a relationship with Swimsuit model Kate Bock. The two are rumored to be dating since 2016. Kate works for different modeling projects based in New York but the couple finds time for each other and shares a quality time. 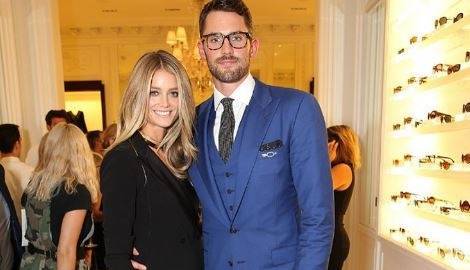 Before meeting Kate, Kevin was in a relationship with his college girlfriend Elise Novak for six years. Apart from that, Kevin Love also dated actress Cody Horn.

The Early Life of Kevin Love

Born on 7 September 1988 in Santa Monica, California, Kevin Love is the second of three children to mother Karen and father Stan Love who himself was a college star and played for 4 years in the NBA. While growing up in Oregon, Kevin he played in Little League with now the NBA player and his childhood friend Klay Thompson.

Kevin always had advanced skills for his age and his tall height also contributed him to score points while playing with other kids. He attended Lake Oswego High School and had average 26.8 points and 14.5 rebounds where he played for 4 years.

Later, Kevin went on to play for the Southern California All-Stars and helped the team win three MVP awards with a 46-0 record. He was named the 2007 Gatorade National Male Athlete of the year as he scored a total of 2628 points setting a record at Oregon State. Kevin also played in the famous McDonald All-American Game

In 2008 NBA draft Love was sought out by Minnesota Timberwolves fifth overall after his UCLA teammate Russell Westbrook. He came off the bench on his debut and scored 12 points and 9 rebounds in a 98-96 win over Sacramento Kings. After having a great season he was named to the 2009 NBA All_Rookie Second Team.

He defeated Kevin Durant in the Three-Point Shootout in February 2011.

Love extended his contract and marked his name with a 31 point performance in a win against Dallas Mavericks and in January 2012, he scored 30 points in 3 consecutive games for the first time in his career.

Following his injury on October 17, 2012, Love would break the third and fourth metacarpals on his right hand during a workout but in just five weeks he made his comeback.

On August 23, 2014, Kevin was traded to Cleveland Cavaliers in exchange for three other players. Following the season he scored a season-high 32 points with a win 120-105 over the Los Angeles Lakers. With Kevin's terrific performance Cavaliers won 34 of their final 43 games and grabbed the No. 2 seat in the Eastern Conference.

Kevin re-signed with Cavaliers on July 9, 2015, and went on to win his first championship ring on October 25, 2016, prior to their win over Warriors and ending a 52-years of major sports championship drought in Cleveland.

On April 1, 2018, he recorded his 400th career double-double with 13 points and 13 rebounds in a 98–87 win over the Dallas Mavericks and knocked down his 1,000th career 3-pointer during the game.
NBA Cleveland Cavaliers Minnesota Timberwolves Basketball UCLA
Videos
More Biography