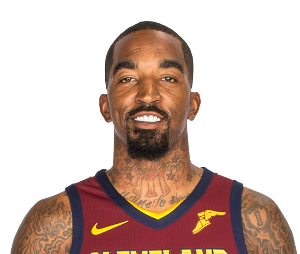 Earl Joseph J.R. III is an American professional basketball player for the Cleveland Cavaliers of the National Basketball Association (NBA). He is known to basketball fans for his incredible three-point filming.

Born on September 9, 1985, Smith was brought up in the Clarksburg section of Millstone Township, New Jersey. His father Rael Jr. was a mason while his mother Ida is a housemaker. His father is also a former basketball player at Tyler Community College.

Smith played basketball for the very first time at Lakewood high school. He then joined Saint Benedict’s Preparatory School where he averaged over 27 points, 6 rebounds, and 5 assists.

Later in the fall of 2003, he signed a letter of intent with the North Carolina Tar Heels to play college basketball.He was named game co-MVP with Dwight Howard in April 2004, at the McDonald’s All-American Game following a 25-point performance.

Afterward, he decided to forgo college, he declared himself as an eligible candidate for the NBA draft. He was selected eighteenth overall by the New Orleans Hornets, in the first round of the 2004 NBA. He was one of the players who was drafted out of high school that year.

In his first season with the Hornets, he averaged 10.3 points, 2.0 rebounds and 1.9 assists per game. In 2005 he participated in the Sprite Rising Stars Slam Dunk Competition, finishing behind Amare Stoudemire and the winner Josh Smith.

He was named the Western Conference Rookie in 2005 for three consecutive in January, February, and March.In his second season, Smith's numbers declined to average 7.7 points, 2 rebounds, and 1.1 assists. Despite the 20-game improvements, the Hornets missed the playoff again.

On July 14, 2006, Smith was traded to Chicago Bulls for Center Tyson Chandler by the Hornets, however, soon on July 20, he was traded again in the exchange with Howard Eisley to the Denver Nuggets.

On October 13, 2007, Smith got involved in a nightclub accident and was suspended for the first three season games of 2007-08.

In Smith’s second season during his first round he playing for 27 minutes against Los Angeles Lakers averaging 18.3 points per game on 53.5% shooting and also had a 31.8% three-point shooting percentage.

On July 25, 2008, he was added to the team USA basketball select team to help the senior team prepare for the Olympics. And on February 10, 2009, Smith was chosen to replace the injured Rudy Gay in the 2009 Slam Dunk Contest.

Smith averaged 14.9 points per game 45.4% shooting on his third trip to the playoff. During 2009-10 season Smith changed the jersey numbers with teammate Chauncey Billups, to accommodate Billups request to wear no.1, the same number he uses to wear with the Detroit Pistons.

Smith signed with the Zhejiang Golden Bulls of Chinese Basketball Association during his 2011 NBA lockout, because he could not return to the NBA until the end of the 2011-12 CBA season. During his time with the golden bulls, Smith scored  CBA career high 60 points and 14 three-pointers and also won a Foreign Player of the week award.

However, Smith was unable to lead Zhejiang into the 2012 CBA Playoffs, as the squad was eliminated from the contention.

In 2012 Smith signed with the New York Knicks. He made his Knicks debut against the Dallas Mavericks. The knicks greatly improved because of Smith and Steve Novak. He eventually became a fan favorite gaining comparison to John Starks.

Smith agreed to a $2.8 million contract with a player option on July 11 with the Knicks.

On December 5, 2012, against the  Charlotte Bobcats, Smith hit the game-winning fadeaway jump shot for a 100-98 win. Later on December 26, Smith connected on a shot that gave the Knicks a 99-97 victory over the Phoenix Suns.

In April 7 rematch with Oklahoma City Thunder, Smith scored 22 points in which five came in the closing minutes and gave the Knicks their 50th win of the season since 2000.

Smith was also awarded the NBA Sixth Man of the year award for the 2013 season. He played 80 games during the season.

On July 11, 2013, Smith was re-signed with the Knicks with a contract wiorth$17.95 million over three years. Smith underwent a surgery for a torn meniscus and to repair a patellar tendon both in his left knee. He was suspended for violating the NBA’s anti-drug program and did not start until he was fit to play after knee surgery.

On January 5, 2015, Smith was traded to the Cleveland Cavaliers in a three-team trade involving the Knicks and the Oklahoma City Thunder. He made his first debut in the team with a loss to the Huston Rockets.

Smith helped cavaliers win against Hawks and reach the NBA finals, where they faced the Golden State Warriors in the 2015 NBA Finals, but lost the series in the six games.

The Cavaliers went on to sweep The Hawks and The Toronto Raptors in the eastern conference Finals to advance to the finals of the 2016 NBA Finals. They went on to win the 2016 NBA championship, as Smith won his first NBA title.

Smith re-signed a $57 million worth four-year contract with the Cavaliers on October 15, 2016. He helped Cavaliers to reach the NBA finals for the third season with 12-1 over the first three rounds.

He struggled over the first 10 games in 2017-18. On December 14, Smith passed Chauncey Billups for the 11th place on the NBA’s career three-pointers made list.

On February 2, 2007, Smith and teammate Carmelo Anthony were involved in a car accident.

On June 9, 2007, Smith and two passengers got into a car accident when the SUV he was driving collided with another car resulting serious head injury and death of a passenger.

On August 5, 2009, Smith closed his twitter account (jr_smith1) after being accused of writing in a way that reflected the blood gangs.

In March 2012, Smith was fined $25,000 by the NBA for posting a photo of model Tahiry Jose in his twitter account. He sued his former team the Zhejiang Golden Bulls the following month for $1 million after the team withheld that much amount from his salary accusing him of faking an injury and missing many practices.

Standing 6 ft 6 inches tall in height and 102kg in weight Smith has three brothers and two sisters. his younger brother Chris played alongside him in the Knicks in 2013-14.

Smith is married to Jewel Harris since August 2016 and has three daughters together: Demi, Peyton, and Dakota. After dating for several years the couple had a short break in their relationship but rekindled later in 2015. Smith proposed her for marriage in August 2015 and the ceremony was held a year later in August 2016.

They already had two daughters born before their marriage. Demi was born on February 9th, 2009 while Peyton was born on April 20th, 2009. The couple's third child was born 5 months prematurely on January 2, 2017.

His former teammates Carmelo Anthony and Chris Paul are his first two daughter’s godfathers. Except for his marriage, he was also rumored to be in a relationship with Ashley Weatherspoon.

Net Worth of J.R. Smith

Currently, his salary is reported to be $14.72 million leading his estimated net worth to be $20 million. He was also the highest paid player in China with the contract of $3 million. Smith has the total NBA career earnings of $25 million.

Smith's additional source of earning is his sponsors. He has an endorsement deal with 50 Cent's energy drink signed in March 2013.

Smith had to pay $48,101 after being sued by the jeweler back in 2010. As reported, he ordered the Black Jesus from the company but never bothered to pay the amount.