Jon Gruden is an American former football coach. He last served as the head coach of the Las Vegas Raiders of the National Football League (NFL) from 2018-2021. Gruden had previously served as the head coach of the Raiders from 1998 to 2001 and the Tampa Bay Buccaneers from 2002 to 2008. Gruden even appeared on ESPN to serve as a color analyst on its Monday Night Football telecasts.

Throughout his coaching career, Gruden has amassed a massive fortune, and his net worth is pretty impressive. Gruden served in multiple teams, including the Southeast Missouri State, Green Bay Packers, and Tampa Bay Buccaneers. After retiring, Gruden began his broadcasting career.

How Much Is Jon Gruden’s Net Worth? Salary & Career Earnings 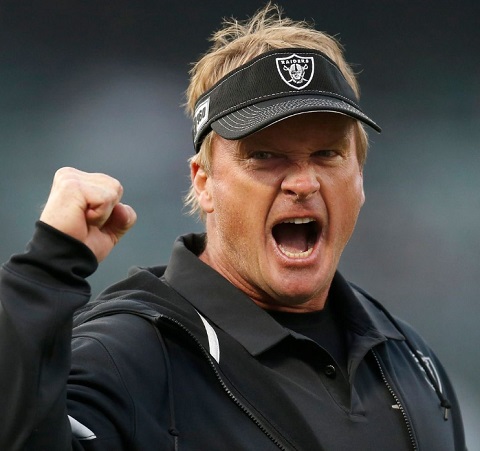 Jon Gruden while serving at the Raiders.  SOURCE: Twitter @IUBarstool

Likewise, Gruden had a deal with the Las Vegas Raiders and took home $100 million when he signed a ten-year contract. After finishing his coaching career, Gruden began his broadcasting career, which may have helped him preserve a considerable fortune.

It was reported that Gruden received a yearly salary of $6.5 million for his job as an ESPN color commentator for Monday Night Football. Apart from that, Gruden may have earned money from brand endorsement. Many renowned brands have endorsed Gruden, including GoPro, Corona, Nationwide, and Dunkin' Donuts.

Gruden Is Married to His Wife, Cindy Gruden: Their Kids

Moving on to his personal life, Gruden is happily married to his long-time girlfriend-turned-wife, Cindy Gruden. The pair first met at the University of Tennessee (UT), where Cindy was a cheerleader, and Jon started as a graduate assistant for the university. 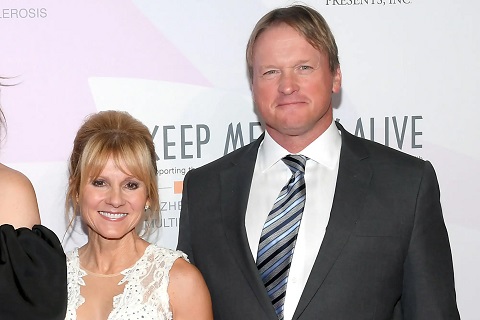 Jon Gruden and his wife, Cindy, at an event.  SOURCE: New York Post

Slowly their love started to bloom, and after a long serious relationship, the couple tied the knot in 1991, and they vowed to be together for a lifetime. There are no rumors about him having any affairs or relationships other than with Cindy.

Cindy remembers her engagement saying, “Bless his heart, he paid $1,800 for that ring — in cash. That was all he had, and he gave it to me.” Jon and his family currently reside in Tampa, Florida. Jon's wife is originally from Knoxville, Tennessee, USA, and has brown eyes and blonde hair. Jon and his wife are blessed with three sons: Deuce Gruden, Michael Gruden, and Jayson Gruden.

It welcomes current and former coaches and players to study various phases of games. He has also instructed me about coaching in different high schools as a guest speaker. Gruden is a good friend of Peter Sterling.

On August 17, 1963, Jon David Gruden was in Sandusky, Ohio, the United States. He was born to his father, Jim Gruden, a professional regional football account and running backs coach and the director of player personnel, and his mother, Kathy Gruden. He is not the only child; he also has a brother named Jay Gruden, a football coach and a former quarterback. His other brother, James, is a radiologist at UNC School of Medicine.

Jon attended his high school at Clay High School in South Bend, Indiana. After high school, he joined Muskingum College in New Concord, Ohio. A year later, he transferred to the University of Dayton, from where he graduated with a degree in Communication in 1986.

Jon Gruden took his first step in coaching immediately after graduating from the University of Tennessee as a graduate assistant. Later, he joined Southeast Missouri State as a passing game coordinator.

In 2009, Jon also got associated with ESPN, where he served as a color analyst on Monday Night Football telecasts and as an analyst for coverage of postseason college football games. After nine years of coaching in the NFL, the Raiders announced the return of Gruden as head coach on January 6, 2018.

After nine years away from coaching in the NFL. He is often compared with the best NFL coaches like Bill Belichick and Wayne Bennett.