Matthew Nagy a.k.a. Matt Nagy is an American football coach and retired arena football quarterback who currently stands as the head coach for the Chicago Bears of the National Football League (NFL). He finished his collegiate career at the University of Delaware (1997-2000). After he failed to receive an NFL contract, he joined the Arena Football League (AFL), where he played for New York Dragons (2002–2003), Carolina Cobras (2004), Georgia Force (2005–2006), and Columbus Destroyers (2007–2008).

How Much Is Matt Nagy Net Worth?

In 2018, Matt Nagy signed a five-year contract with Chicago Bears. As of now, the financial portion of Nagy's contract is unknown. It's estimated the average NFL head coaching salary is roughly $6 million to $7 million. Bill Belichick, Pete Carroll, and Jon Gruden are the highest-paid NFL coaches of 2020.

Before joining the Bears, he worked as an assistant coach for the Kansas City and Philadelphia Eagles. Also, he spent six seasons as a quarterback in AFL, earning a decent salary. As of 2020, his net worth is approximately $20 million.

In April 2018, he purchased a newly built, Cape Cod-style mansion for $2.75 million. The six-bedroom property just steps away from Lake Michigan and partially surrounded by a deep, wooded ravine. Furthermore, the 9,400-square-foot home features a 4-car garage, a custom Amish-built cabinetry with a high-tech media room.

Matt Nagy's Wife: Is He Married?

Nagy was married to his high school sweetheart, Stacey. The couple tied the knot in 2000 in a secret ceremony. The couple shares four children, all of whom are boys and two of whom are twins. 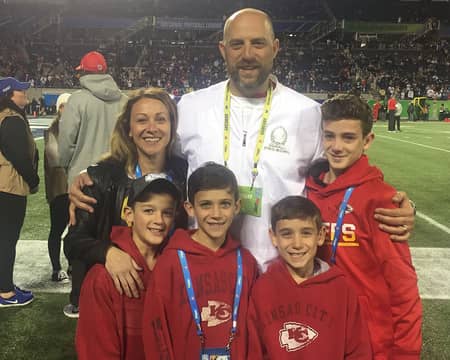 Unlike other wags, Stacey remains far from the limelight. Little is known about Nagy's wife's professional life, though she and the boys are often present for Nagy’s press junkets and attend his games. Stacey was with her husband when he made the decision to take the head coaching position for the Bears.

Matt was born to Gail Stouch and Bill Nagy. Despite his parents' divorce, he remained close with both. His father is a former defensive line coach for New Jersey high schools. Later, Bill became a businessman for various ventures before becoming a teacher in 2009, teaching at schools in the areas where Matt was coaching at the time.

He played high school football and basketball for Manheim Central High School in Pennsylvania. Upon graduation, he attended the University of Delaware and played for the Delaware Fightin' Blue Hens football team.

In 2009, Nagy became an assistant coach with the Philadelphia Eagles, spending five seasons in various offensive positions. In 2013, he joined Kansas City Chiefs as a quarterbacks coach. In 2016, he was promoted to the offensive coordinator.