Wayne Bennett is a former rugby player for Australia who played as winger and fullback for his home state, Queensland during the 1970s. Further, he is also regarded as the greatest coach in the history of rugby games and sports.

Most recently, he was sacked by the Brisbane Broncos of the  National Rugby League as their head coach. Now he will coach the South Sydney Rabbitohs from the 2019 season onwards. Previously, he was the head coach of the Australian side in 1998 and from 2004 to 2005. Further, he was also an assistant coach for the New Zealand rugby team. He became the first non-British to coach the English national team.

Wayne Bennett, Australian nationality with white ethnicity, was born on 1st January 1950 in Allora, Queensland, Australia. He was born to an abusive alcoholic father. His mother's name is Patricia Bennett. He has five siblings, two brothers: Robert and Dwight Bennett, and two sisters: Michelle and Gretta Bennett.

Before he started his career as a professional player and coach, he was a police officer at 15.

As a popular and best rugby coach of all time, Wayne Benette's net worth is currently under review. He has earned a lot from his coaching career.

He signed a $1.8 million worth contract extension with Broncos which suggests that his net worth could be more than a million dollars. Taking the contract into account, his salary is reportedly around AUD 600,000 annually.

He has been a guest and conference speaker at several functions of companies like National Australia Bank, Virgin Blue, and Incentive Action are some of the business houses that he has spoken at. He is reported to get over $5000 to speak at these events same as the fellow Australian Rugby coach, Wally Lewis.

He has also written, Don’t Die with the Music in You book which has been noted for being the best selling book about rugby that went to sell over a hundred thousand copies which must have fetched good sum money which adds to net income.

Besides the Broncos Coach has helped several charitable causes like The Firefighters Club and special needs children.

Sportsbet, an online bookmaker even announced to donate $2000 to charity if the great rugby coach smiled during or after the match with the Panthers.

Bennett played as winger and goal kicker for Queensland (1971 to 1973). During his playing career, he cited coach Bob Bax as his source of inspiration for becoming the coach. He has also represented Australia on two occasions on the tour to New Zealand in 1972.

In 1976, Wayne Bennett began his career as the coach, coaching  Ipswich, after which he moved to Brisbane where he coached  Brothers and South of Brisbane Rugby League Premiership sides.

He was appointed the coach of newly formed Brisbane Bronco which also had a future assistant coach like Allan Langer in 1988, he went on to coach several teams like ST. George Illawarra Dragon, Canberra Raiders, Newcastle Knights.

He later rejoined the Brisbane Bronco in 2015. He holds a national coaching record for Australian rugby teams for most wins in grand final games with Seven and most season appearances  24 times with an individual club, The Broncos.

Also, he was selected as coach of England in 2016.

Kevin Walters, a former assistant coach of Brisbane Broncos is expected to be a replacement for Bennett when his tenure at the side expires in 2019.

Moreover, after a bitter dispute with Broncos officials, Bennett was officially sacked as coach of the Brisbane Broncos on 2 December 2018.

Later two days, Bennett expressed to the media about his sacking stating “You don’t get the chance to say goodbye to anybody when they sack you and they tell you not to come back to the building.” Further, he added, “But that’s alright. That’s all fine. We’ll all get over it. I was happy to be sacked. Just leave it at that. I was happy".

For the 2019 season, he is all set to coach the South Sydney Rabbitohs.

Wayne was married to Trish Bennett who he fathered a son Justin and two daughters, Katherine and Elizabeth Bennett.

Their marriage ended after 42 years, after coaching legend, Bennett fell in love with Dale Cage. They met during his stay as a coach for Newcastle Knights. Dale was a medical secretary at the club when they had an affair. 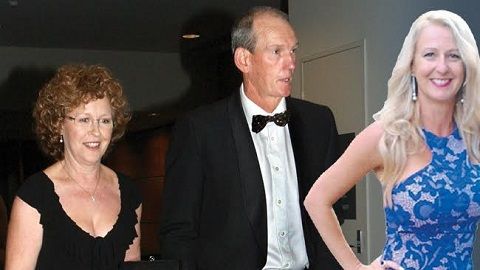 Wayne Bennett dated Dale Cage who is a mother of three children from her previous relationship. There were reports that her children were very disappointed when they found out that their mother had a relationship with Bennett. But now the couple has reportedly cut up, according to Broncos coach's friends.

Besides this, he has a brother, Bob Bennett who is the coach at the Papua New Guinea team.