Johnny Gargano is an American professional wrestler who is the first-ever NXT Triple Crown Winner. Known for his stint with the WWE, he has also won  NXT Champion, 3X  NXT North American Champion, and a former NXT Tag Team Champion. He performed under the ring name Johnny Gargano.

Cleveland, Ohio native, Johnny Gargano was born on 14th August 1987, under the star sign Leo. He is the son of Adrianne, of polish descent, and Francis Gargano, a restaurateur is of Italian descent. The thirty-four years old holds an American nationality and is of mixed ethnic background. He stands 5 ft 10 in (178 cm) tall and weighs 199 lb (90 kg).

He then went on to work with some of the tops promotions on the American circuits:  Pro Wrestling Guerrilla (PWG), Dragon Gate USA (DGUSA),  Chikara, and Evolve. With the promotion, he held various titles 2X DGUSA's Open the Freedom Gate Championship,  Chikara Campeonatos de Parejas, the Evolve Tag Team Championship.

Also, he appeared for national promotions Ring of Honor (ROH) and Total Nonstop Action Wrestling (TNA) during his independent days.

Later, he started as a regular as an NXT contestant and signed a contract in April 2016.

After they split up, Gargano next won the NXT North American Championship in January 2019 and the NXT Championship in April the same year. Following the victory, Gargano became the first-ever NXT Triple Crown Champion.

What's more? Gargano is the first man to have held the NXT North American Championship on multiple occasions.

Gargano is married to fellow professional wrestler Candice "LeRae" Dawson, a former NXT Women's Tag Team Champion and the only female titleholder in the promotion's history.
Gargano got down on a knee in January 2019 and they tied the knot on September 16, 2016, in Disneyland. 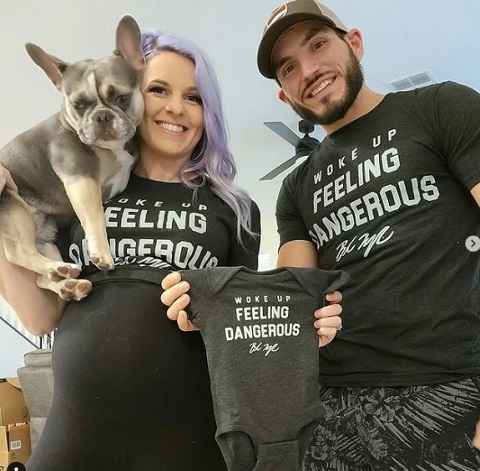 On 12th August 2021, The wrestling power couple came with a surprise, announcing that they are expecting their first child, a boy, due in February 2022. Since she has been on maternity leave.

How Much Is Johnny Gargano's Net Worth In 2021?

Johnny Gargano is currently a free agent after he declined to sign a new contract with WWE in December 2021. While with WWE, he reportedly made $0.5 million per annum as a base salary. Further, there is extra money from championships and endorsements.

Aforementioned, Johnny is active as a professional since 2005. Before WWE, he has worked for various American independent circuits with various titles and championships. For sure, he has summoned a huge amount from the independent circuit as well.