An English professional footballer Jesse Ellis Lingard better known, Jesse Lingard currently plays for Premier League side Manchester United as well as for the England national team as a winger.

Jesse Lingard currently has an estimated net worth around $8 million. He has earned his wealth widely through his professional career as a footballer. Let's know Lingard's salary, career, and caps from his brief bio.

Jesse Lingard was born on 15th of December 1992, in Warrington, England. His birth name is Jesse Ellis Lingard and the birth sign is Sagittarius. Regarding his nationality, Lingard is English and he belongs to Caucasian ethnicity. He enrolled at William Beaumont Community High School.

Lingard began playing football for Penketh United at a very tender age. Then at the age of seven, he joined the Academy of Machester United. He was the member of Manchester United team that won the “2010-11 FA Youth Cup”.

Net Worth and Salary of Jesse Lingard

As of 2018, the hero of the Old Trafford, Jesse Lingard has an estimated net worth around $8 million. He has earned his wealth widely through his professional career as a professional footballer. Till the date, the footballer has played for several renowned clubs including Leicester City, Birmingham City, and Derby County.

Jesse Lingard owns several luxurious cars at current. His extended contract with Manchester United has made him earn a very good amount. He has bought a Bentley GT car worth £200,000. Moreover, he also has £120,000 worth Range Rover Sports SVR £80,000 Mercedes C63S AMG and Range Rover Sports V8, which is valued at £96,000.

In the year 2011, Lingard signed his very first professional contract with Manchester United. He was first promoted to a senior squad of the team on 30th November 2011, making his professional debut in the “League Cup” quarter-finals against Crystal Palace at Old Trafford.

On November 6, 2012, he was loaned to Leicester City for a month. The next day, he made his Leicester City debut in a 0-0 draw away to Bolton Wanderers. On 2nd January 2013, his loan was extended hence, he totaled 5 appearances for the club.

On 19th September 2013, he joined Birmingham City on month’s loan. Two days later he made debut for the club in the Championship match against Sheffield Wednesday at St Andrew’s. He played overall 13 matches and scored 6 goals for the club.

On 27th February 2014, Lingard moved to Brighton & Hove Albion on a 93-day loan. On 8th April, he made his club debut in a 4-1 victory against Leicester City. Throughout his career with Albion, he scored 4 goals and played 17 matches including in the Championship play-offs.

On 2nd February 2015, he was loaned again to Derby County until the end of the season. There he made his debut on 14th February, against Reading in the “FA Cup”. For Derby County, he played overall 14 matches and scored 2 goals and then returned to his native club Manchester United.

Jesse Lingard has represented his nation England, both in senior and junior level. As a member of England U-17 national team, he played 3 matches. On 13th August 2013, he was first called up for England U-21 national team for a friendly match against Scotland U-21s.

On 16th November 2015, he was first called for the England national team for a friendly match against France. However, he didn’t appear in the match. He made his international team debut in October 2016, for World Cup qualifier against Malta in 2-0 victory along with his teammates Luke Shaw, Ben Gibson, Chris Smalling, and Fraser Forster. So far, he has capped 8 times his national team side without scoring a single goal.

He was also included in the 23-man squad for FIFA World Cup 2018. Lingard made his World Cup debut against Tunisia and scored his first goal in the second match against Panama. the team also reached the semifinals of the tournament.

As of now, twenty-four aged Lingard is possibly single and unmarried. However, previously he was romantically linked to his ex-girlfriend Emma Hyde. The two used to live together in a £500,000 luxury flat in Bowdon, Cheshire along with Emma’s son from the previous affair. The pair was in a relationship for years but broke up in 2015.

Emma even claimed that Lingard dumped her after being famous. He has rented an apartment and gifted a luxury car. However, she had to quit everything after their split. Emma previously worked as an assistant manager at the jewelry shop and now manages a salon.

Currently, he is in an affair with a rising model, Jena Frumes. 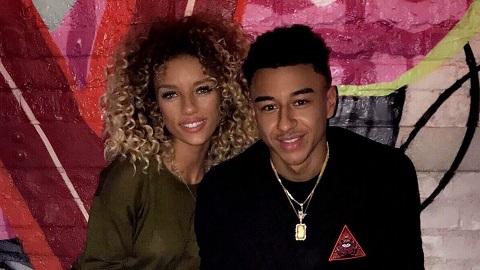