Jermall Charlo is an American professional boxer who is a world champion in two weight classes. He held the WBC middleweight title since 2019 and the IBF junior middleweight title from 2015-17. Currently, he is ranked #3rd in the world's best active middleweight by BoxRec, and #4th by The Ring magazine and the Transnational Boxing Rankings Board.

Lafayette, Louisiana native, Jermall Charlo was born on 19th May 1990, under the star sign Taurus. The thirty years old holds an American nationality and is of Afo-American ethnic background. Regarding his physique, he stands 6 ft 0 in (183 cm) tall and weighs 160 lbs (72.73 kg ).

How Much Is Jermall Charlo's Net Worth In 2020?

As of 2020, Jermell Charlo's net worth is approximately $2 million. He has summoned his wealth widely through his boxing career.

Further, he is a four-wheeler enthusiast who owns various cars including Lamborghini, Ford, and many others.

In the public eyes, WBC Middleweight Champion, Jermall Charlo is single. There is less to no information about his past/present love affair or girlfriend. Further, no media has caught him with a lady who is assumed to his potential girlfriend. 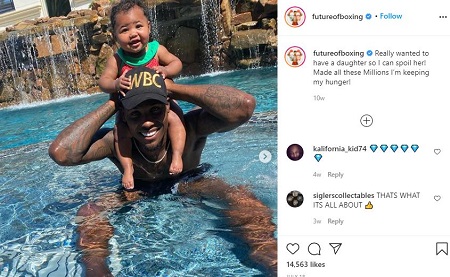 Active on Instagram with 380k followers, most of his posts is from boxing or with friends or cars. Among that, Charlo has posted a picture with a adorable baby girl, captioning, "Really wanted to have a daughter so I can spoil her! Made all these Millions I’m keeping my hunger!" May Charlo's wish comes true.

Jermall and his identical twin Jermell (younger by one minute) were born to Kevin Charlo and Terrie Charlo.  Both brothers enrolled at Alief Hastings High School in Houston, Texas. Further, they together began boxing following their father, himself a former boxer, into the gym.

As an amateur, Jermall was expected for a spot on the 2008 U.S. Olympic team but was forced to drop out due to a toe injury. He competed in the amateur ranks for one more year and finished with a record of 65 wins and 6 losses.