Jeff Hardy is one of the prominent names in the wrestling world. A professional wrestler since 1993, he is currently signed to WWE, where he performs on the SmackDown brand. Besides WWE, Hardy also worked for Total Nonstop Action Wrestling (TNA), Ring of Honor (ROH) and several companies on the independent circuit.

Apart from being pro wrestler, Hardy is a singer-songwriter, painter, and musician. As of 2019, his net worth is estimated at around $12 million. Furthermore, the 41-years-old hunk is married and is blessed with 2 children together with his wife Beth Britt.

Jeff Hardy Net Worth in 2019; How much does he Earn as Salary?

Jeff Hardy reportedly has an estimated net worth $12 million, as of 2019. The main source of Jeff Hardy's income is his earning from his successful wrestling career.  He summoned a fortune amount of salary.

For the year 2015-16, he earned around $1,623,529 while his sponsorship/endorsement deals garner him $313,725. Furthermore, he also received royalty checks for advertisements and appearances in some prominent WWE pay per views such as Royal Rumble, New Year’s Revolution, and WWE No Way Out.

Also, he had a lavish mansion but unfortunately, his house burnt down to the ground on 15th March 2008. Jeff is 6 feet tall in height and weighs around 102 Kgs. People also followed him on Twitter and other social networking sites. Moreover, info about his bio & career can be taken from wiki.

Jeff Hardy Personal Life; Who is his Wife?

Speaking about his private life, Jeff Hardy is a family man.  He is married to his beautiful spouse, Beth Britt Hardy. The couple together has two children: Ruby Claire and Nera Quinn. 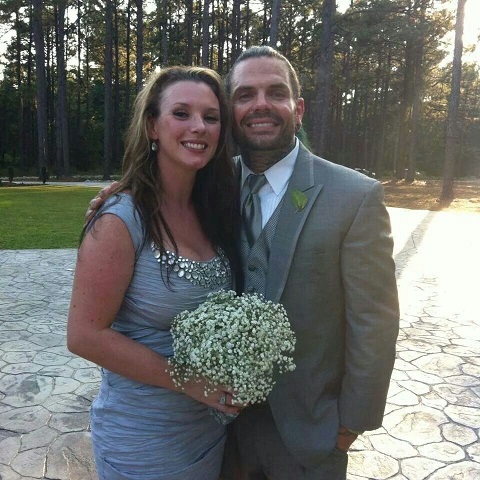 Going deep into their relationship, the duo met in 1999 when Jeff was out with his brother Matt in a Southern Pines, North Carolina bar, while the brothers were celebrating their first tag team championship win. The couple date 12-years long and welcomed their first baby prior to finally tying the knot in 2011. Later a few years, their second daughter was born.

Talking more about him, he is a strong and competent wrestler of the wrestling world, he is god gifted, and he is also a musician, songwriter, and a painter too.

This paramount wrestler was born in the year 31st August 1977, in North Carolina; the United States. He is an American by his nationality and his ethnicity is white. Matt Hardy is his siblings and he is also a prominent wrestler. His parents were Claude and Ruby Moore Hardy.

Talking about his early life & career, his mother died when he was nine years old, and in his teenage, he was interested in motocross rather than wrestling. He had his first race when he was in ninth grade; he was also interested in playing baseball and football.

If we talk about his professional wrestling career, Jeff Hardy started his wrestling career professionally in 1993. On May 23, 1994, he made his debut against Razor Ramon. Later in 1998, he and his brother signed a contract with WWF, and were famous as the  “The Hardy Boyz”.

He has been extremely splendid in his game; he takes his career as his passion, that’s why he is one of the respective players of the wrestling world.

Throughout his career, Hardy has faced various other renowned wrestlers such as Randy Orton, Shinsuke Nakamura, The Miz, Jason Jordan, and Seth Rollins.

Read More.Longtime Rivals Daniel Bryan and Samoa Joe Back in the Ring: Money in the Bank Ladder Match