The wrestler is currently signed to WWE and performing on the Smackdown show.

Shinsuke Nakamura Net Worth in 2019; How much is his Salary?

Shinsuke Nakamura has an estimated net worth of $3.5 million as of 2019. He has earned a big sum of money through his wrestling matches. According to the source, he earns $1.1 million per annum as his salary.

Today was the last match of 2018. Whatever people may say about me, I know what I'm doing.anyway,Thanks.

Apart from wrestling, Nakamura has also earned some from the music video as well as from endorsement with various renowned brands. He owns several expensive cars and is living a luxurious life.

He owns cars like Demio Skyactive, BMW X6, and Range Rover. Further, he has a lavish mansion in Florida, U.S.

Shinsuke Nakamura Personal Life; Is he Married? Who is his wife?

The professional wrestler Nakamura is a married man. He tied the knot with his college girlfriend Harumi Maekawa on 1st September 2007 in a  ceremony held in Tokyo. As per the source, their wedding was attended by around 400 guests including Nakamura and Maekawa’s family and several renowned faces from the Japanese Professional Wrestling. 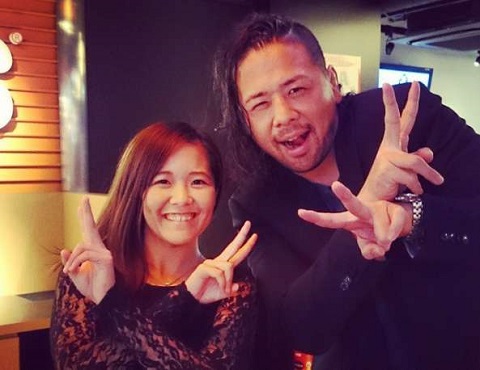 Now its been more than 10 years of their wedding but the couple still share the deep love between each other. Till the date, there is no news and rumors related to conflict, separation, and divorce in their marital affairs.

The couple currently live in Orlando, Florida. Nakamura also revealed that Triple H offered the job to his wife Maekawa while the couple first the United States.

A native of Mineyama, Kyoto, Japan, Shinsuke Nakamura was born on 24th of February 1980. Talking about his nationality, he is Japanese and belongs to Asian ethnicity. However, he has not revealed information about his parents, siblings, and childhood.

In March 2002, Nakamura joined New Japan Pro-Wrestling and promptly began earning name and fame for himself as a bright prospect for the company. There, he was trained under Vale Tudo. On 31st December 2002, he made his mixed martial arts debut in a fight, where he was defeated by Daniel Gracie.

After his series of losses against his rival Hiroshi Tanahashi, Nakamura announced that he would depart from the company for learning excursion in order to further improve his wrestling skills.

On 24th September, he made his long-awaited comeback to New Japan, joining Black Stable which had the objective of reforming New Japan along with Masahiro Chono as the President and him as the ace.

From 2012-2016, Nakamura competed in the IWGP Intercontinental Champion.

In the history of IGWP, Nakamura is the only youngest Heavyweight Champion having won the title for the 1st time at the age of twenty-three and nine months.

On 22nd February 2016, Nakamura signed with WWE and began his career with NXT with an impressive performance, defeating Sami Zayn in his debut match.

Further, he made his debut in SmackDown on the 4th April 2017, interrupting The Miz and Maryse Ouellet.

On the 31st October, he defeated one of the strongest contenders Kevin Owens and earn a spot on Team SmackDown. However, after a loss of Team SmackDown at Survivor Series, he got eliminated from the match.

Apart from wrestling, Nakamura has featured in the Japanese music video “happy” which is directed by Nigo who is also a fashion designer, record producer, and DJ.