Michael William Krzyzewski better known as Mike Krzyzewski is a former basketball player and former coach. He served as the head coach at Duke University from 1980 to 2022. During his stint, he led the team to five NCAA Championships, 12 Final Fours, 12 ACC regular-season titles, and 15 ACC Tournament championships.

Krzyzewski has an estimated net worth of over $45 million in 2022. The famous Duke University coach has an annual salary of $7,044,221 while he earned $9.7 million in 2019. Krzyzewski is married and has three lovely daughters with his spouse. So let's take a look at his personal life, net worth, and career highlights in detail.

Mike Krzyzewski's Net Worth and salary

Mike Krzyzewski has an estimated net worth of $45 million as of 2022. Krzyzewski made $7,044,221 as his annual salary in 2021. He was paid $9.7 million per annum in salary as a head coach of Duke University's men's basketball team in 2019 while his earnings in 2020 was $8.98 million. Being a famous basketball player of his time, he is also one of the highest-paid university coaches ever.

Although he can be associated with several brand endorsements, there is no confirmed news proving his ties and sponsorships. So, most of his current income generates from his current coaching career.

Mike is also a kind-hearted human and believes in giving back to society as he is engaged in several social and humanitarian works. 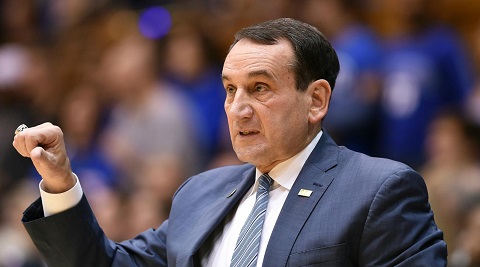 Who is Mike Krzyzewski's Wife?

Mike Krzyzewski is a married man and Carol Mickie Marsh is his wife. The two celebrated their marriage in the Catholic chapel at West Point in 1969. The lovely couple is living happily together from 59 years and also has three lovely daughters from their almost six-decade-long marriage.

Added that, the coach now has nine grandchildren. Mike Krzyzewski is not only a successful player turned coach but he is also a loving husband and caring father.

Despite being a famous coach and earning a huge sum of salary, he isn't involved in any extramarital affairs. There are no rumors of divorce between the lovely couples. So as of now, Mike lives a harmonious life with his family.

Mike Krzyzewski is 5 feet and 10 inches tall in height and has a thin body type.

Mike Krzyzewski was born on February 13, 1947, in the beautiful city of Chicago, Illinois to William Krzyze and Emily M. Krzyzewski. His birth sign is Aquarius and holds American citizenship.

He attended St. Helen Catholic School in Ukrainian Village, Chicago. After completing high school, Mike moved to Archbishop Weber High School in Chicago in 1969, he completed his graduation from the United States Military Academy at West Point, New York, in 1969.

He was also the Captain of Army basketball team in his senior season. He was perfect in his coaching career.

Mike played pro basketball, starting from 1966 and he officially retired in 1969. Since 1980, he joined the Duke University as an assistant coach.

He served as an assistant coach for the Indiana and Army.  On March 18, 1980, he was considered as the head coach of the Duke University.

Mike has been the head coach of the USA national team in various international games as well. In 1987, he won a silver medal at the 1987 and 1990 World University Games.

He as an assistant coach to the US National Basketball Team in 1984 and 1992 brought two Olympics basketball golds.

Read More.The Grayson Allen Era comes to an End after Duke faced a loss to Kansas in Elite 8