Jason Quigley was born Jason Robert Quigley on May 19, 1991, in Ballybofey, Donegal, Ireland. He rose to fame only after his successful career, so much about his early life and parent is under the radar. Jason has not shared a word about his education and academic qualification. Talking about his physical appearance, Quigley stands six feet and one inch tall and weighs 72 kg.

Jason started training for boxing at a very early age. He was an extremely promising boxer from his early days. The boxer rose to number one in both the AIBA European and World amateur rankings. Quigley rose to fame in 2009 after winning his first international event at the 2009 European Youth Championships. In 2011, Jason won gold at the 2011 'Gee Bee' Multi-Nations tournament. 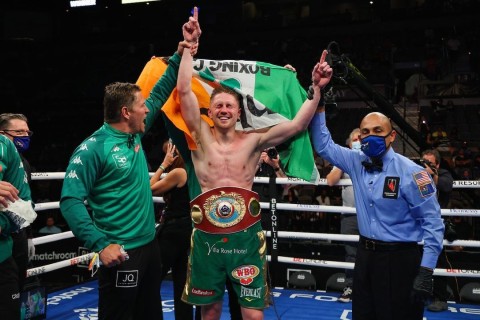 Jason made his professional debut in July 2014 against Howard Reece and won the match via TKO in the first round. In 2014, He fought in two more matches and won both of them. The following year, Quigley fought in six matches and won all of them and remained undefeated. In 2017, Jason won his first title of vacant WBC-NABF middleweight against Glen Tapia. In July 2019, The boxer lost his title to Tureano Johnson.

In May 2021, Jason won the vacant WBO-NABO middleweight title against Shane Mosley Jr. In his professional career of twenty matches, The boxer has lost just one match and won the rest of them. He is set to face Demetrius Andrade for the WBO middleweight title.

Net Worth, Salary and Earning

Jason Quigley has an estimated net worth of more than $1 Million. Unlike other professional boxer's Jason is not open about his earnings. Quigley is very much early in his career and shall be making millions in the future. The salary of a professional boxer ranges from $50,000 to more than a million.

Jason is engaged to his longtime girlfriend, April McManus. The love birds recently got engaged in a private ceremony. They have been together for some time. Following their posts, we can be sure that April and Jason are the proud parents of a daughter, Sierra. The family of three is living a happy life.