Gossip J.J. Watt: Is He Retiring After the 2022 NFL Season? Know About His NFL Career and His Career Earnings, Net Worth and Salary

J.J. Watt: Is He Retiring After the 2022 NFL Season? Know About His NFL Career and His Career Earnings, Net Worth and Salary

J.J. Watt stunned the world with his Instagram post, claiming he played his last NFL home game. Once he does leave the sport, Watt will retire as one of the best defensive ends. Aside from his title as the greatest defensive player, J.J. also earned one of the highest salaries earned by a player in his position.

Watt's choice to retire might be due to his health scare in mid-2022. On October 2, 2022, the NFL star revealed he had atrial fibrillation. Similarly, the talented athlete told the world he had to get his heart shocked back in rhythm on September 29. Finally, On December 27, 2022, Watt announced his plan to retire after the 2022 NFL season ends.

The Future Hall of Famer, J.J. Watt, Announced his retirement through social media! 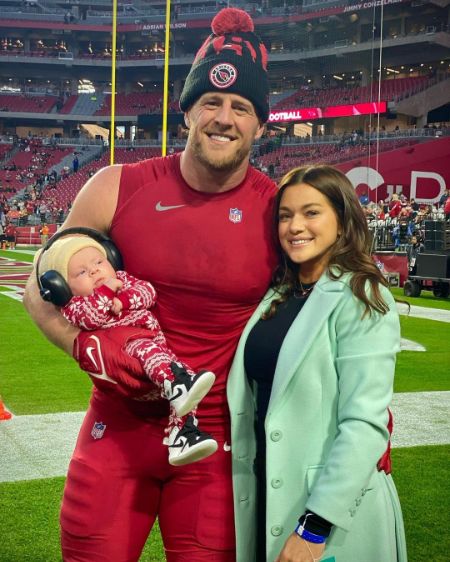 J.J. Watt posted a picture with his wife and child, stating this was his last home game. SOURCE: [email protected]

After his posts, J.J. became one of the most searched football players on the interwebs. His tweet about his retirement became trending on Twitter. Similar to how Rob Gronkowski found himself trending. Watt posted about his decision on his Twitter and Instagram accounts simultaneously.

J.J. opened up about his retirement plans to his fans. But, it still eludes his supporters as to why the talented defensive end opted to leave. In comparison, some players want to live out their glory days past their prime. J.J. is retiring in his early thirties.

The Recent Health Scare Could Be the Reson Behind J.J.'s Retirement

Health scares to an athlete usually mean something is very wrong. They keep themselves in their peak physical condition. So things had to change when J.J. Watt found himself with atrial fibrillation. Watt revealed his health scare a few days after the ordeal.

The health scare could be the primary reason for J.J.'s retirement. However, the NFL star keeps the details about his decision to stop playing football remain elusive to the fans. Watt also kept his plans after his retirement away from the fans.

J.J. Watt started his NFL journey after the 2011 draft!

Even as a kid, J.J. Watt, knew about his talent in football. As such, he played the sport from a very young age. Watt also played football in both high school and college. But the talented defensive end skipped his senior season in college and joined the NFL draft in 2011. 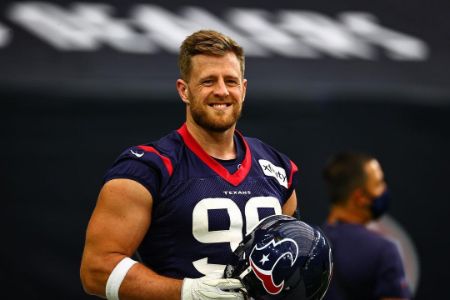 Among all the defensive ends, J.J. was the first to be picked in the first round and the 11th pick. Watt held the spot of top performer in all categories but one. The only category he performed decently was the 40-year dash during the 2011 NFL Draft. Houston Texans hit the jackpot with J.J., and the team offered him a four-year contract worth $11 million.

In two years, Watt showed his worth to the Texans. Seeing the potential in J.J., the Texans offered him a six-year contract extension. Before the 2014 season started, Justin James Watt and his team signed the said extension deal. From the said agreement, Justin would earn around $100 million in the next six seasons, given he was still on the roster.

Honoring his six-year contract, J.J. Watt requested his release from the Texans on February 12, 2021. After leaving the Huston Texans, Watt joined the Arizona Cardinals on March 1, 2021. Cardinals and the talent signed a two-year contract worth $28 million. 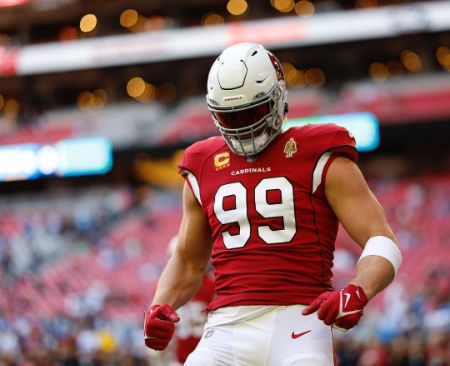 J.J. Watt posted a picture wearing the Cardinals uniform, and the Arizona Cardinals signed him in 2021. SOURCE: [email protected]

Watt gained a $23 million guarantee from dealing with the new NFL team. At the time, not a single soul thought this would be his final contract in the NFL. On September 28, 2022, J.J. experienced a health scare in his second year with the Cardinals.

Following his health issue, Watt played under the NFL team's banner for a few more months. As 2022 closes, J.J. and the Cardinals' contract came to a close. With it, the defensive end announced his decision to retire once the 2022 season ends.

J.J. Watt earned mountains of cash from his career in NFL!

With over a decade in the NFL, J.J. Watt earned massive wealth. Currently, Watt commands an estimated $64 million as his net worth. Over the years, J.J. pocketed millions a year from all of his income sources. 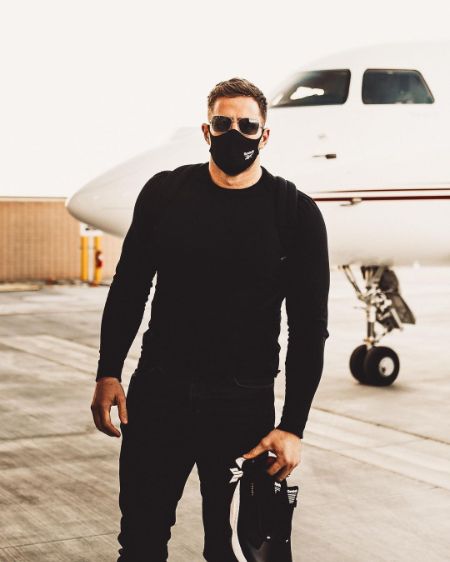 J.J. Watt posted a picture next to a private jet; also, Watt owns millions as his estimated net worth. SOURCE: [email protected]

Watt earned an eight-digit figure from his salary alone. From his contract with the Arizona Cardinals, J.J. earned a whopping $28 million in two years. The defensive end in question made a base salary of $11.25 million in his final season with the Cardinals in 2022. Also, his previous team, Houston Texans, paid the talented NFL player $15,500,000 in his last year with them in 2020.

J.J. earned around $129 million throughout his career in the NFL. Watt pocketed a mind-numbing figure for sure, but he isn't the wealthiest NFL athlete; no, that honor belongs to Russell Wilson.

Watt and his earnings besides his salary!

J.J. Watt earned one of the biggest pay a defensive end in the NFL could make. Aside from his salary as a player, J.J. also made money from endorsement deals. And many top-brace brands signed a contract with Watt. J.J. Watt and Reebok hold an endorsement deal, so Watt usually wears gear provided by the brand, like his mask in this picture. SOURCE: [email protected]

Sponsorship deals alone brought J.J. millions a year. And his biggest endorsement contract was from these brands: Reebok, Gatorade, Mizzen+Main, American Family Insurance, and Wheels Up. According to a piece by Forbes, Watt pocketed $7 million from his endorsement deals.