Khiva, Xorazm Region, Uzbekistan native, Israil Madrimov was born on 16th February 1995, under the star sign Aquarius. The eldest child of the Madrimov family, he is Muslim. Israil often mentions his parents as great support and inspiration to him.

How Much Is Israil Madrimov's Net Worth In 2021?

4X WBA Inter-Continental super-welterweight title winner, israil Madrimov, has earned a decent sum of money. The undefeated has a total of six professional bouts in the count. Though his management has not revealed any details on his financial side, the light-middleweight is expected to make no less than the five-digit figure per fight. According to the source, boxers make $50,000 per annum on average. The factors for boxers' income vary from their popularity as well as professionalism.

The ambasador of Numa, he is also sponosred by Buka Boxing and Turkestan Su. As of 2021, his net worth is approximately $0.1 million.

Being in media for a long time, the public is curious to know his personal side more. However, the boxer has maintained his love life low key. He has zipped his lips when asked about his girlfriend. Love life. There is no information available regarding his past and present affairs. Hence, he is believed to be single. 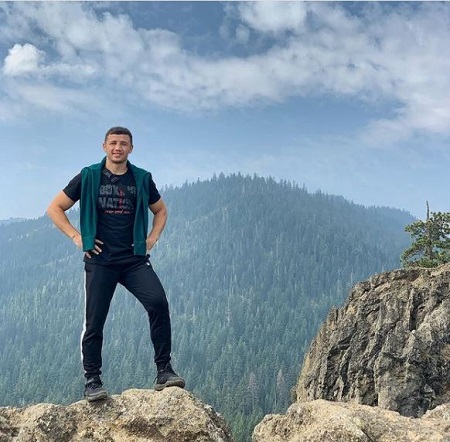 Originally Israil into football and wanted to pursue his career as a football player. However, one fine day he went to a boxing gym for the first time at his 10 in 2005, which eventually influenced him much to the MMA field. In 2010, he was called up to the national team, and his first major tournament was the 2011 AIBA World Junior Championships in Kazakhstan, winning a silver. He said, "The experience was very good for my development, and at the time, I was learning a lot from my coach Tulkin Kilichev. He was a huge part of my life, and I am thankful for everything he has taught me.”

On 24th November 2018, Israil made his professional debut against Hard Rock Live, Atlantic City, for the vacant WBA Inter-Continental super-welterweight title. He won the title via TKO in round 6. Further, he retained the title in about at Turning Stone Resort & Casino, Verona, on 9th March 2019, knocking out Frank Rojas.
On 8th June 2019, he defeated Norberto Gonzalez at Madison Square Gardens, New York City.

On 5th October 2019, he defended the WBA Inter-Continental super-welterweight title against Alejandro Barrera via TKO. On 29th February 2020, he retained the title for the 3rd time at Ford Center at the Star, Frisco, Texas. On 15th August 2020, he faced Eric Walker. The bout was a unanimous decision in Israil's favor.