Isa Tara Guha is a famous sportscaster and former cricketer currently working for BBC Sport as a cricket commentator. She is well-known for the winning 2009 World Cup with her national team England. After retiring from the cricket, she started her career in journalism.

The resident of Great Britain, Guha, reportedly earns around $100,000, as her annual salary and has a net worth of over $2 million. Isa is currently married to her longtime boyfriend Richard Thomas since September 16, 2018.

The former British professional cricketer currently works as a column writer for one of the best networks. Being a cricket professional, she is popular in sports commentaries.

As of 2020, the British sportscaster/anchor Isa Tara Guha has an estimated net worth of $2 million. According to the source, she earns an annual average salary of $100,000 from her successful career.

Besides, she is earning a good amount of money from her broadcasting career. Since the commentators are getting well-paid from the sports networks.

Isa married to her boyfriend Richard Thomas on September 16, 2018. The couple exchanged their vows in Cornwall England in front of family and friends. Her husband Richard is the songwriter for rock band Brother & Bones.

She took the help of Twitter to reveal the news of her wedding, posting a picture with a caption of "It's been a challenging year but with this incredible human by my side I know I can get through anything. So lucky to have him in my life - these two pics pretty much sum up our amazing day, with so many of our best friends and family."

They were in a relationship for a long time before getting married. So far there are no rumors about Isa having an extramarital affair. 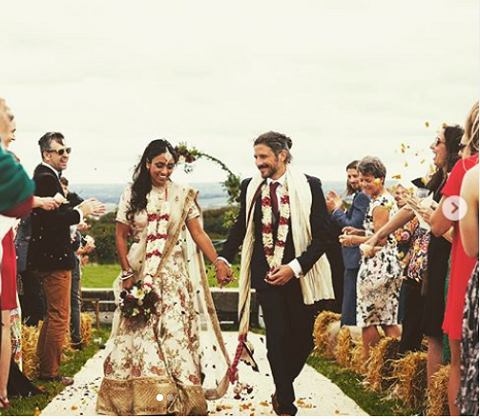 The famous cricketer is quite active on social sites including Facebook(facebook.com/isaguhaofficial), Twitter(twitter.com/isaguha), and Instagram(instagram.com/isaguha) and her personal website are "isaguha.com".

Isa Guha was born on 21 May 1985 in High Wycombe, Buckinghamshire, England to Barun Guha and Roma Guha. As per her nationality, she is British and belongs to the Asian ethnic group. Further, Isa Tara Guha grew up with sister Panchali Guha and brother Kaushik Guha and she has a star sign of Gemini.

Guha writes a column for the BBC Sports website and is a special summary of the occasional test match. In April 2012, she joined ITV Sport as co- presentative of the coverage of the Indian Premier League by ITV4. In 2016, Guha was a member of Australia's first Triple M radio test cricket comment team.

In 2018 she was a commentator for the England/Pakistan Test matches for Sky Sports. She was also announced in her improved Australian cricket coverage as a commentator for Fox Cricket. Isa played along with the captain of English team Charlotte Edward.

For the Australia v India test series from December 2018 to January 2019, she is currently a member of the BT Sports commentary team. Sarah Taylor is also among the member of the 2009 England women cricket team.