Is Odell Beckham Jr.'s Gay Rumors Are True or He Is Dating a Girl

Handsome Odell Beckham Jr is an American football player. He plays in the position of wide receiver for New York Giants in National Football League (NFL). He has been the most popular and productive football player in the field, however, his misconduct outside the field has always been under scrutiny of media especially his speed driving.

Among his fans, it has always been the most talked subject and rumor of him being a gay. He is very handsome and sweet to people around him and that a beautiful man playing such a violent game is commonly speculated and mistaken for being gay.

Is Odell Beckham Jr. a Gay?

In 2016, several speculations over the sexual orientation of Odell Bechham Jr. were made after he released a video of dancing with his male friend on Instagram. Later, he also shared a video on Instagram where he is singing Marvin Gaye's Sexual Healing while in the bathtub and his friend comes out of the water surface.

Also Read : Odell Beckham Jr.'s Salary From his Profession and his Net Worth. Also know about his House, Cars and Endorsement deals

Soon after his Coachella hit with Amber Rose, Odell quickly moved onto Cuban Instagram model Polyxeii Ferfeli. Not even the people had recovered from the desert heat, the new couple was seen hanging out in Six Flags Magic Mountain, fun park. Odell made sure that he won a stuffed toy animal for the beautiful lady he was courting. 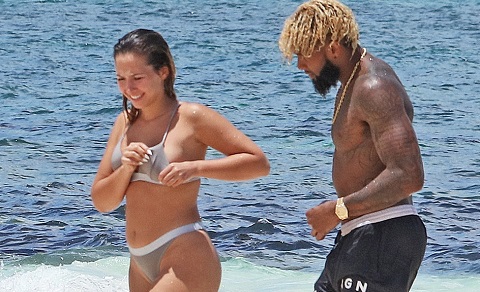 The couple went on a holiday together in July 2017. They went to Mexico to speed some quality time together. However, they made sure to let paparazzi take steamy hot pictures of the duo together. Polyxemi who is always on trend and following the trend is usually seen having fun in the 'The Nice Guy' in Hollywood.

In November Odell was dumped by Ferfeli with another boyfriend. Soon after, he was rumored to be dating an Instagram model Rosanna Hernandez who now lives in New Jersey but is originally from Cuba. The previous relationship rumor not getting down, Odell was again rumored to have an affair with a R and B singer Nevaeh Jolie.

Also Read: How Much is Odell Beckham Jr's Net Worth? Know in Detail about his Salary, Car, House, and Awards

Past Relationships of Odell Beckham Jr.

Odell who is a successful football player is seldom seen with women and that speculated a rumor of being gay among his fan following and the social media. Odell who never commented on this particular topic has also never mentioned about his relationship status. That all changed when he was seen with the sexy bombshell Amber Rose. 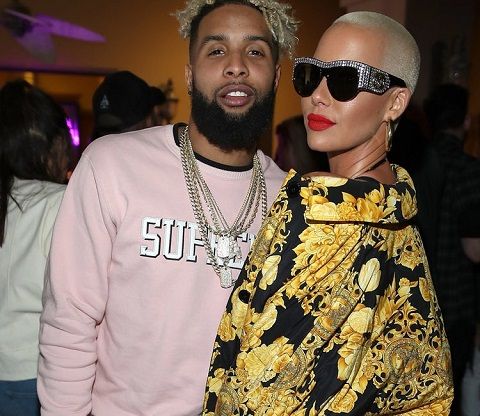 Amber Rose and Odell Beckham Jr. were first seen during the year of 2017. The duo went to music festival Coachella together. Amber Rose is also the ex-wife of Wiz Khalifa and has also dated the R&B and rap star Kanye West. The couple were seen displaying lots of PDA. The 8 year older siren, later, addressed his gay rumour that he is '150% not gay' and people just accuse him of being gay because he is too sweet.