Gossip Is David Goggins Married? Who is his Wife?

Is David Goggins Married? Who is his Wife?

Probably the toughest man alive, David Goggins is an American ultramarathon runner, ultra-distance cyclist, triathlete, motivational speaker and author who is quite popular for his record of most pull-ups done in 24 hours. A former United States Navy SEAL and the United States Air Force Tactical Air Control Party member, Goddins also took part in Iraq and Afghan war which is why he has superhuman feats of strength and ultra-endurance.

An accomplished athlete, David Goggins is popular for his career achievements but his personal details and married life has not been talked much. Here we have all the information regarding his wife, married life, personal life and more.

Who is David Goggins' Wife?

The ultramarathon runner and cyclist has not revealed much about his relationship and personal life. However, we can dig up some of the key facts about his love life and family.

Goggins was once married to his wife Aleeza Goggins. The couple reportedly got married in a secret ceremony in 2005. According to some sources, the couple isn't together anymore but hasn't filed for divorce yet.

As per some reports, Aleeza asked for a divorce with her husband in around 2007-08 after a couple of years of their marriage. His wife Aleeza who is a nurse by her profession was also a part of his support team. She is 10 years older than David. 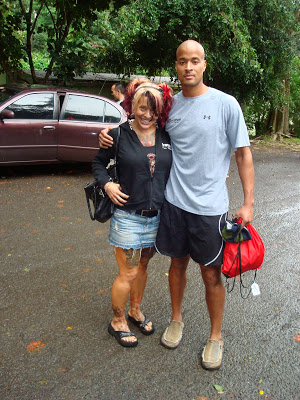 Though David has never talked about his relationship, Aleeza frequently made comments about her husband on the media. She also made shocking revelations that David hates running or riding the bike.

"He realized that in order to gain attention and to raise money, he was going to have to suffer. He hates running. He hates riding the bike. I’m here to tell you he’s angry every morning he has to do it.”

Back is 2012, David reported that Aleeza's visa was about to expire and would then return to Japan. So, Aleeza is probably in Japan and living her single life.

Related: David Goggins Salary and Net worth; Price of his Books on Amazon

Why did David Goggins and his wife Aleeza separate?

According to David Goggins, the lack of sex between the couple was the reason Aleeza wanted to separate from him. Things went worse at the same time as he met an accident and his wife had to undergo major surgery. Their house was also burglarized.

Aleeza asked to give her some time to move on with all the things and the couple separated in mutual understanding.

David was then rumored to be dating an Olympic gymnast which Aleeza did not like. The couple then did marriage counseling to make things work but nothing changed. Till now, none of them have filed for divorce. The couple is living separately but are good friends to each other.