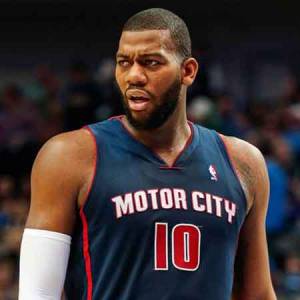 Greg Monroe is an American professional Basketball Player player who plays in the National Basketball Association (NBA). Monroe currently plays for the Toronto Raptors as their center.

Monroe has an estimated net worth of over $50 million.  He is currently signed to a one-year contract with the Toronto Raptors and will make $2.16 million as salary for the 2018-19 season.

Gregory Keith Monroe Jr. was born on June 4, 1990, in New Orleans, Louisiana to parents Gregory Monroe Sr. and Norma Jean Monroe. As per his nationality, he is American and belongs to Afro-American ethnic group.

Monroe attended Helen Cox High School in Harvey, Louisiana where he played for his high school basketball team. During his senior season, he held an average of 21.0 points and 14.0 rebounds.

After completing high school, Gregory Keith Monroe Jr. enrolled at Georgetown University and played for the Georgetown University. He was named to All-Big East first team and Big East All-Tournament team, in his sophomore season. He forewent his senior season to enter the 2010 NBA Draft.

The Detroit Pistons selected Greg Monroe with their seventh overall pick in the 2010 NBA draft. He signed with the Pistons on July 6, 2010. In his rookie season with the Pistons, he played in 80 games recording of an average of 9.4 points, 7.5 rebounds, 1.3 assists and 1.2 steals per game.

The Milwaukee Bucks signed Greg Monroe to a three-year, $50 million contract on July 9, 2015. In his first season with the Bucks, he ended the season with an average of 15.3 points, 8.8 rebounds, and 2.3 assists. The Bucks traded Monroe to Phoenix Suns on November 7, 2017, in exchange for Eric Bledsoe.

The Toronto Raptors with talents such as Kawhi Leonard, Kyle Lowry, Danny Green, and Serge Ibaka, signed Monroe on August 10, 2018.

Greg Monroe is not married to date. Less is known about his love life as he has not opened about it. He has not been rumored to be seeing anyone at the moment which suggests that he may be single at the time.

Monroe does not have a child of his own but is very close to his nephew. He has often posted pictures of his nephew on his Instagram account.

Greg  Monroe has an estimated net worth of over $50 million as of 2018. Since his debut in NBA, Monroe has made earnings of $73.5 million.