Danny Green is an American professional basketball player who plays in the National Basketball Association (NBA). As of 2019, Green currently plays for the Los Angeles Lakers as their Small forward, Shooting guard. He has played for other teams like Toronto Raptors, Cleveland Cavaliers, Erie BayHawks, San Antonio Spurs, Reno Bighorns, San Antonio Spurs.

As a Small forward, Shooting guard, Danny Green reportedly earns around $14,634,146 as his yearly salary from Los Angeles Lakers. Further, he has an estimated net worth of over $25 million.

Green is not married yet but is currently in a relationship with his girlfriend Blair Bashen.

As of 2019, Danny Green has an estimated net worth of over $25 million, mostly earned through his NBA career.

Kept aside Danny Green financial earnings, his personal assets includes a Home in Suffolk County, on Long Island, New York, worth $1.9 million. Further, he reportedly owns various cars, however, the brands are yet to disclose.

Other than being a famous NBA Small forward, Shooting guard, Danny Green is pretty famous in social media.

Danny Green is unmarried and is currently dating his girlfriend Blair Alise Bashen. The couple is in a relationship with Blair since 2015 and celebrated their 4th year anniversary on June 14, 2019.

Blair posted a photo of the couple and captioned:

"Can’t believe we celebrated our 4-year anniversary yesterday!! This past year has been a crazy year filled with a lot of ups and a few downs, but we always make it through whatever comes our way! I could not have imagined a more AMAZING way to spend our last day of year 4 than celebrating you becoming an NBA World Champion once again!! I love you @greenranger14, and I will always be here supporting you through it all!" 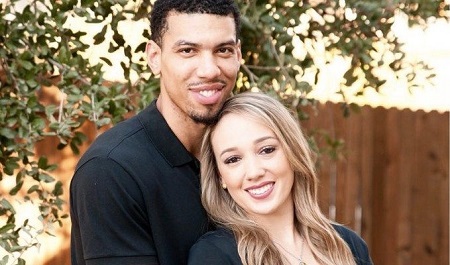 Green's message to his future wife on their anniversary was also very sweet. He wrote:

Been a wild ride, lot of ups and downs but one helluva year and I really appreciate you being by my side for the journey...love you so much and can’t wait to see wat the future has in store...Happy Anniversary babe

A native of Houston, his girlfriend Blair attended Purdue Grad High School and was also the volleyball player of her high school team Purdue. She also coaches volleyball at SA Force.

Danny and Blair own two dogs named Gizmo & Nuke and calls herself their momma.

Danny Green was born on June 22, 1987, in North Babylon, New York, the United States to parents Danny Green Sr. and Rene' Darrell. As per his nationality, he is American and belongs to the black ethnic group. Further, his star sign is Cancer.

He grew up along with his siblings, Rashad Green, and Devonte Green. His brother Dvonte is also a basketball player currently playing for Indiana Hoosiers men's basketball as their guard.

Danny Green, in his high school career, held an average of 9.4 points and 4.1 rebounds. After completing high school, Danny Green enrolled at North Carolina and also was the part of the university basketball team.

Danny Green was picked 46th overall in the 2009 NBA Draft by Cleveland Cavaliers, where Blake Griffin was the no. 1 pick. As a rookie, he appeared in 20 matches before making a move to San Antonio Spurs the next season.

After 6 days and appearing in 2 games, Green joined the NBA D-League team the Reno Bighorns. While still in contract with Spurs, he also played for Austin Toros and Union Olimpija in 2011.

Green was traded to Toronto Raptors along with his teammate Kawhi Leonard in exchange for DeMar DeRozan, Jakob Pöltl and a protected 2019 first-round draft pick on July 2018.

On July 6, 2019, he was signed by the Los Angeles Lakers to a two-year contract.

Danny Green is not only a world-class athlete but also has a very attractive individual. The Famous NBA star is 6.5 feet tall in height and weighs around 95 kgs.