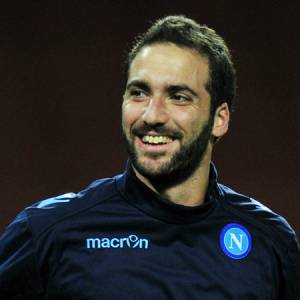 Gonzalo Higuain is an Argentine professional football player who plays as a striker for the Italian top side Juventus and his national side Argentina.

The 29 years old striker has played for clubs like Real Madrid, Napoli, and Riverplate. He has an estimated net worth of $16 million in 2017.

Gonzalo Higuain was born on 10 December 1987, in Brest, France, and his full name is Gonzalo Gerardo Higuain. His father Jorge Higuain was also a professional footballer who played for Stade Brestois 29 and his mother is Nancy Zacarias Higuain. Though he was born in France, he moved to Argentine when he was 10 month and has an Argentine nationality.

He has three brothers; Nicolas Higuain, Lataro Higuain, and Federico Higuain who is also a professional footballer playing for Columbus Crew SC.

Higuain began his youth footballing career with the Argentine club River Plate and made professional debut for the club on 29 May 2005, in a match against Gimnasia y Esgrima. He scored his debut professional goal on February 12, 2006, in a 3–1 victory over Banfield. He played 35 games for the club scoring 37 goals.

He then switched to the Spanish side Real Madrid in 2006 and made his debut for the club on January 11, 2007, against Real Betis in the Copa del Rey. His first goal for the club came on 14 January 2007, against Real Zaragoza at Santiago Bernabeu. He was in the club for four seasons winning 190 caps for the team adding 109 goals to his tally.

Gonzalo Higuain then moved to the Italian club, Napoli on 27 July 2013, signing to a five years contract wearing the number 9 Jersey. His debut for the club came on 10 August 2013 in a friendly against Benfica. He played 104 games for the club scoring 71 goals. He then moved to the league's top side Juventus. He officially signed with Juventus on 26 July 2016, for a fee of €90 million paid in two installments making him the most expensive transfer ever in the Italian league. He has played 62 games and scored 32 goals in all the tournaments.

Higuain has won several club titles in his career. He recently helped Juventus clinch the Serie A title being the top scorer of the league. Some of his teammates during the campaign were Paulo Dybala, Gianluigi Buffon, Blaise Matuidi, Benedikt Höwedes etc. Besides he has been honored with uncountable individual awards. He was the Juventus MVP of the Year for last season.

Higuain is one of only three foreign-born players to have played for Argentina in a FIFA World Cup. He made his professional national team debut on 10 October 2009, against Peru. He was selected in the 2010 FIFA World Cup by the Argentine coach Diego Maradona, he too featured his team in the 2014 FIFA World Cup. He has won over 70 caps for his national side scoring 31 goals.

Some of his teammates of the National squad are Lionel Messi, Angel Di Maria, Sergio Aguero etc.

Gonzalo Higuain is in a relationship with his longtime girlfriend Lara Wechsler. The couple met while he was at Napoli and are in a relationship since 2016. They were first seen together in February 2016 and made the official announcement of their affair in August 2016. The couple also together attended his fellow mate Lionel Messi's wedding.

Earlier in 2012, he dated Soledad Fandiño. Soledad is an Argentine model and actress who is known for portraying in the TV No hay 2 sin 3 and Son de Fierro. the couple is believed to have called off their affair.

Besides these, Higuain was rumored to have sent a direct message to an 18-year old Italian model Antonella Fiordelisi. His zodiac sign is Sagittarius.

Net worth and Endorsements