Giannis Antetokounmpo is a Greek professional basketball player who plays in the National Basketball Association (NBA). Giannis currently plays for the Milwaukee Bucks as their forward.

Antetokounmpo is selected by the Milwaukee Bucks in the 2013 NBA draft. Before entering the NBA, he played for Filathlitikos (2012-13).

Giannis Antetokounmpo's Net Worth & Salary As of 2021

One of the best players in the league right now, Antetokounmpo also makes huge money from his endorsement deals with various brands. He has a shoe deal with Nike which paid his $25,000 annually until 2017. The new extension will reportedly pay him $8 million to $10 million annually.

Giannis Has A Son With His Girlfriend Mariah Riddlesprigger

Giannis Antetokounmpo is currently in a relationship with Mariah Riddlesprigger. Mariah used to play collegiate volleyball and interned for the NBA for two years. Mariah often goes to the Bucks game and cheers for her man. The two have not married yet. 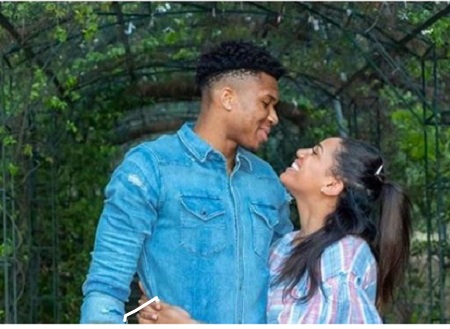 Antetokounmpo and his long-time partner welcomed their first child - Liam Charles Antetokounmpo on 11th February 2020. The couple shared the news in the fall that they were expecting a child and later shared photos of the baby shower introduction.

Giannis Antetokounmpo was born on December 6, 1994, in Sepolia, Athens to parents Charles and Veronica Antetokounmpo. As per his nationality, he is Greek and belongs to the Afro-American ethnic group. His parents were immigrants from Nigeria.

Giannis Antetokounmpo made his professional debut as a basketball player with Filathlitikos of Greece's second-tier basketball league in 2012-13 season.

Giannis had played for the Filathlitikos' youth team prior to joining the senior team. He ended his season at Filathlitikos with average stats of 9.5 points, 1.4 assists, and 5.0 rebounds playing in 26 games.

Giannis Antetokounmpo has completed five seasons with the Milwaukee Bucks. During his time at the team, he has been named twice to the NBA All-Star team in 2017 and 2018, awarded the NBA Most Improved Player in 2017, and named to the NBA All-Defensive Second Team in 2017.

The Famous NBA star is 6 feet 11 inches in height and has a weight of around 110 kg. Since his NBA debut, he has not had any serious career injury highlights and is one of the most active and healthy athletes in the NBA.