Gareth Southgate is a retired footballer who last played for Middlesbrough and the England national team from 1995 to 2004. He also represented Crystal Palace and Aston Villa during his playing career.

Southgate has served as a manager for England's national team since the FIFA World Cup 2018.

A native of Watford, England, Gareth Southgate was born on September 3, 1970, to Clive Southgate and Barbara Southgate. His birth sign is Virgo. Regarding his nationality, Southgate is English, and he belongs to the Caucasian ethnicity.

Since his childhood, Southgate had a keen interest in football and dreamed of becoming a popular footballer someday. He started playing football for the Crystal Palace, playing right-back and then in central midfield. Regarding his academic background, Southgate is a graduate of Hazelwick School.

In 1988, Southgate was promoted to the main team of the Crystal Palace after having played several years in the club's youth team. From 1988-to 1995, the player played 152 league matches, scoring 15 goals. 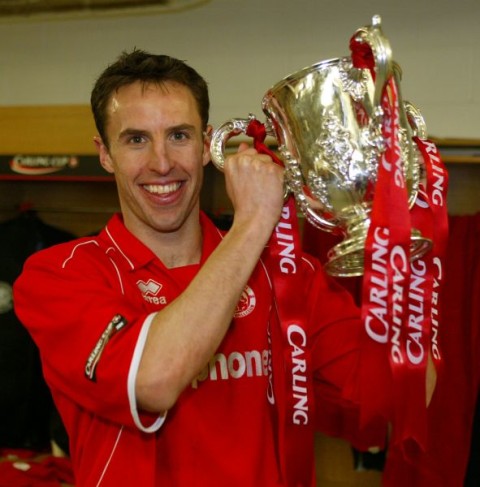 In 1995, Southgate moved to Aston Villa, signing a contract for $3.33 million. He was converted into a center-back and a part of a formidable defense at the club. He began his career at Aston with an impressive result, lifting the League Cup and leading the team towards the “UEFA Cup.” Throughout the 1998-99 seasons, he didn’t miss any of the Premier League games.

In short, he made 192 league appearances and scored seven goals for the club before he moved to Middlesbrough in 2001. In the beginning season with Middlesbrough, Southgate became a firm favorite winning a club’s Player of the Year award following a series of assured displays while receiving no yellow cards. For the 2002-03 seasons, he became the first captain to lift the League Cup at the Millennium Stadium with his team.

Southgate made 160 league appearances and scored four goals during his five-year spell with the club. Southgate played his last match as a professional footballer against Sevilla in the 2006 “UEFA Cup Final.”

In December 1995, Southgate was first called up for the England national football team for the match against Portugal, where he debuted as a substitute.

On 22nd May 2003, he scored an international goal for his nation in a friendly match against South Africa. Southgate was capped 57 times for England.

In June 2006, Southgate signed his first contract as a head coach for the Middlesbrough. His notable victory as a manager was in May 2008, in the 8-1 win against Manchester City.

After Sam Allardyce resigned from the head coach position for the England national team, Southgate was put in temporary charge of the national team on 27th September 2016. After kissing the victory in his first game in a 2-0 win against Malta, England went on to a 0-0 draw with Slovenia, defeat Scotland in a 3-0, as well as a 2-2 draw with Spain, despite leading 2-0 and conceding goals in 89th and 96 minutes.

On 30th November 2016, he became a manager of the England national team, signing a 4-year contract. He is also the head coach at FIFA World Cup 2018 for England, which has the players like Harry Kane, Dele Alli, Jamie Vardy etc. His team is playing against Colombia today, July 4, in the round of 16.

Forty-seven years talented coach Gareth Southgate is a married man. He exchanged wedding vows with his sweetheart Alison. The pair has two children who completed their happy family.

Apart from his love life, Southgate admired Bryan Robson the most in his growing upstage.

Currently, Gareth Southgate is signed-up with the English National Team as a head coach, where he earns around $2.40 million annually as a salary. As of 2022, he had an estimated net worth of around $12 million.

Southgate always carries himself with enormously fashionable attires.  He has good collections of fast cars as well. In 2006, Gareth bought the property near Harrogate, North Yorks, for $4.33 million. Furthermore, in 2016, he kept his mansion for sale for $4.27 million.