Glenn Murray is a former English professional football player who played as a striker for several clubs, including Rochdale, Crystal Palace, and Nottingham Forest. After 19 years of footballing career, he took retirement on May 31, 2021.

Hailing from the suburbs of Maryport, England, Glenn Murray was born in 1983. He celebrates his birthday on the 25th of September every year. The 37 years old footballer's zodiac sign is Libra.

The 6 feet tall striker's father's name is Martin. Other than that, he has kept the details of his mother and siblings (if he has) are yet to be disclosed. Additionally, there is no information about his education.

Glenn Murray started his footballing career by playing for a non-league club named Workington Reds. After two years, in 2004, he joined the American team, Wilmington Hammerheads. He played in 14 games and scored 3 goals with the side before joining Barrow in the same year. With the new side, he played in 6 games and scored 6 goals. Afterward, he joined the Conference National side named Carlisle United. He made 58 appearances with the team and was a part of the team that won the Conference play-off and Football League Two. In 2006, he was sent on loan to Stockport County.

Upon his return, Glenn was once again sent on loan to Rochdale, with an option to buy. When the loan period ended, Rochdale decided to buy him. After he was bought, he made 27 appearances and 10 games. In the next season, he was sold to Brighton & Hove Albion.

In the 2010-11 season, he uplifted the Football League One championship with the team. In total, he spent four seasons with the club and played in 136 games, with 57 goals to his name. Afterward, he joined a number of teams.

Glenn spent the 2020-21 season with the EFL side of Nottingham Forest. He played in 16 games and scored 2 goals. On 31 May 2021, the English footballer announced his retirement from the sport after 19 years of footballing career. In his career, he played for a total of 12 teams with 217 goals in 624 appearances.

The Maryport, England native had a very illustrious career in football. It is reported that he used to earn a salary of £40,000 per week before he took retirement. Additionally, his transfer fee, in his whole career, was reported to be €9.45 million, as per transfermarkt.com.

As per the same source, his market value while playing for Nottingham Forest was around €300,000. Considering all of that, he must have accumulated healthy net worth. Well, Glenn Murray reportedly has a net worth of around $1.5 Million.

The retired footballer is currently in a blissful marital relationship with his long-time wife. Glenn is married to Stacy Murray. The two reportedly shared the wedding vows in 2014. 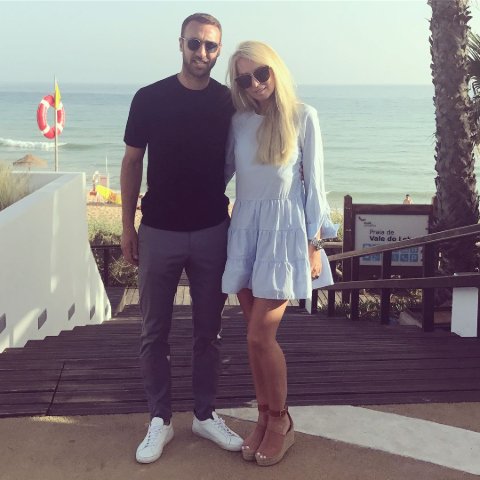 Although they legalized their bond in 2014, they were together way before that. However, the exact time is yet to be revealed. But, considering that their first son, Harley Dawson, was born on June 25, 2004, it can be assumed that they were dating since the early 2000s.

While they were still dating, on July 1, 2012, they welcomed another child, a daughter named Alba, in their family. Two years later, they walked down the aisle. Ever since then, the husband-wife duo's bond has become stronger than ever and the family of four is living happily together.