Jamie Richard Vardy celebrated as Jamie Vardy, is a well known English professional footballer. He is the player member of Premier League Club Leicester City and the England team. His playing position is as a striker but he can also play as a winger.

He has an estimated net worth of $12 million. He married his long-term girlfriend Rebekah Vardy after having an affair in 2016.

Born on January 11, 1987, at Sheffield, England, his childhood was considered not so good. He is the son of Lisa Vardy and Richard Gill.

Before turning professional, he also worked as a technician making medical splints.

In 2002, he started his career in football after being released by Sheffield Wednesday. Later, he joined Stocksbridge Park Steels in 2003-2010. He has also played for FC Halifax Town (2010-11) and Fleetwood Town (2011-12). His first match as the national player was against the Republic of Ireland in 2015.

By scoring eleven consecutive goals in Premier League matches 2015, he broke the record of Ruud van Nistelrooy and became the new record holder. He was coached by Nigel Pearson at Leicester City. 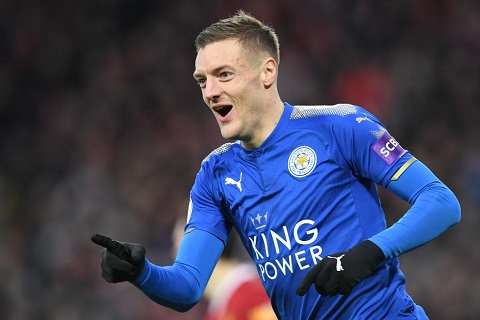 Vardy had lots of controversies around him in the past. Starting in 2007, he was blamed for an assault while protecting his deaf friend followed by another incident outside a pub. A video of him abusing a fellow gambler at a casino also went viral.

He can be seen using the word “Jap”, a racist comment, continuously. Later, he apologized for his action and took the full responsibility for it.

Vardy and Rebekah started dating in 2014, while Rebekah she was working as a nightclub promoter. The duo celebrated their married on 25 May 2016 at Peckforton Castle in Cheshire.

He has three biological children, two with his wife and one from his previous girlfriend. He is also a stepfather of two children from his wife previous relationships.

Happy Christmas Eve from us all 🎄🍾

In November 2015, Vandy launched V9 Academy, an annual week-long camp designed to offer coaching and guidance to 60 non-League players and provided them the opportunity to show their skills in front of scouts from league clubs.

He is also the ambassador of Dorothy Goodman School, a special needs school in Hinckley, Leicestershire.

Net Worth & Salary of Jamie Vardy

Jamie Vardy signs new four-year Leicester contract that will keep him at the club until the age of 35. His total career earnings and salaries boosted his net wealth.