Mertens was born on November 17, 1995, in Leuven, Belgium, the second daughter of Liliane Barbe and Guido Mertens.

At 18, Mertens reached the finals at the 2014 QNet Open. Her first WTA doubles title was at the 2016 ASB Classic in Auckland, New Zealand with An-Sophie Mestach. In January 2017, she won the Hobart International beating Monica Niculescu in the final.

In 2018, she retained her Hobart International title and along with Demi Schuurs, also won the doubles title. The season saw Mertens advancing to her first Grand Slam (Australian Open) quarter and the semifinal. She next won the Ladies Open Lugano by beating Belarusian Aryna Sabalenka. This was followed by her double titles win with Kristen Flipkens and the singles title at the Morocco Open. 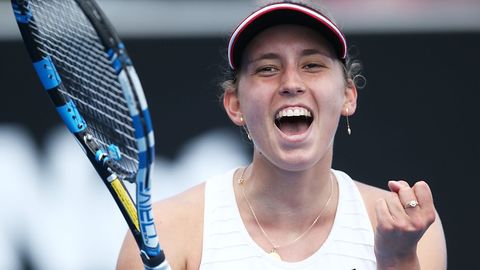 At the French Open 2018, she lost in the second round to Antonia Lother. The season disappointed her again when she lost to Dominika Cibulková in the third round of the Wimbledon. In 2019, the Belgian played in her second Australian Open where she lost to Madison Keys in the third round. This year she also had her biggest career win to date by clinching the Qatar Open title. In March, she won her biggest doubles title to date alongside Sabalenka at Indian Wells. Two weeks later, the pair won the Miami Open doubles title and the Sunshine Double.

She was upset by Barbora Strycova in the fourth round of the 2019 Wimbledon. Though she did relatively better at the Grand Slam doubles by reaching the quarterfinals. In September, she reached her second Grand Slam singles quarterfinal at the US Open. She then won her first Grand Slam doubles title with Sabalenka and consequently became doubles no 2 in the world.

In 2020, the Leuven native played in her third Australian Open. In the tournament, she lost in round 3 to Simona Halep. She next made it to the quarterfinals of the US Open for the second consecutive year. Mertens however was bested in the last 8 by Victoria Azarenka.

The Belgian got her first title in two years by winning the 2021 Gippsland Trophy. She then went on to the Australian Open. In the fourth round of the competition, she lost to Karolina Muchova. On the other hand, she had much more success in the doubles. Along with Sabalenka, she secured her second Grand Slam title by beating the pair Krejcikova and Siniaková.

Mertens has won $7.7 million in prize money since she turned pro in 2013. The 25-year-old tennis player's net worth is estimated between $1million and $5 million. It's worth the notice that Mertens has participated in 9 Grand Slams. And even making the first round of the majors can get the player's weighty participation money. Sizeable monetary benefits reaped by Grand Slams' contestants are hard to ignore. 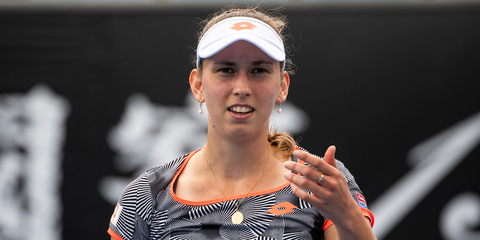 As it happens those losing in the first round of the Australian Open have been reported of bringing in AU$10,000 in prize money. Likewise, reports suggest, players, qualifying for the second earn AU$20,000, and those who make it to their third and fourth rounds rake in $22,000 and $35,000 respectively.

Mertens is currently in a relationship with her coach and boyfriend Robbe Ceyssens. She has oftentimes credited Ceyssens for her tennis successes. Robbe is one and half a year her senior. The first time Elise shared the picture of Robbe with her fans was in April 2019. The Insta activity however gave little to no confirmation if she was dating her coach. The duo, in any case, continued to pose by each other's arm for the many Instagram posts that followed. 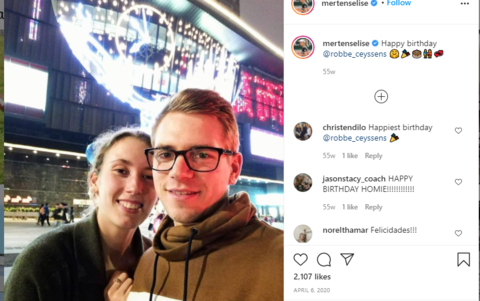 On April 6, 2020, the two times Grand Slam winner sort of announced her relationship with the mentor by wishing him a 'happy birthday' through her IG account - only this time she did it throwing some classic red love heart emoji.