Erath, Louisiana native, Elijah Mitchell was born on 2nd May 1998, under the star sign Taurus. The twenty-three years old holds an American nationality and is of Afro-American ethnic background. He stands 5 ft 10 in (1.78 m) tall and weighs 200 lb (91 kg).

How Much Is Elijah Mitchell's Net Worth In 2021? Salary & Contract

As of 2021, Elijah Mitchell's net worth is approximately $1 million.

Elijah Mitchell is in a relationship with Jasmine LeJeune for a long-time now. The couple shares two children together.

The couple had their first child, a baby boy named Emerson Reid Mitchel. In 2020 September, they had their second son, Elliott Ryan Mitchell. 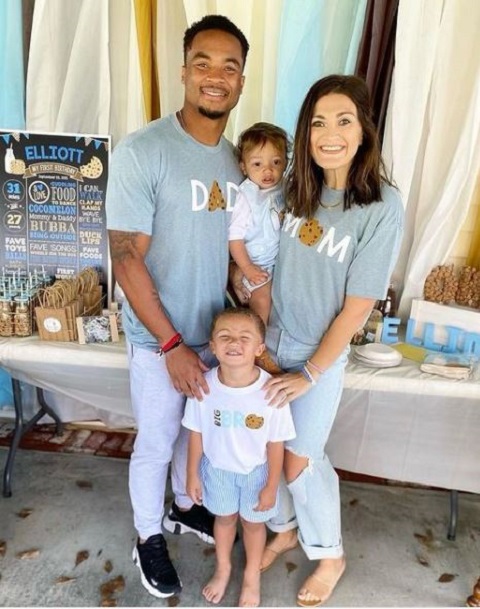 Elijah Mitchell with his partner and children SOURCE: Instagram @15ive_

Elijah Mitchell is a quite confidential person when it comes to his private life. On the contrary, his girlfriend Jasmine has shared every bit of her Life from beginning of their dating life to being parent.

Elijah Mitchell enrolled at Erath High School, where he played high school football. During his senior year, he played in eight games due to injury but still rushed for 1,903 yards and 28 touchdowns. Overall, he rushed for 4,045 yards and 50 touchdowns on 457 carries during his high school.

After graduation, he joined the University of Louisiana at Lafayette. As a freshman, he rushed for 257 yards and four touchdowns on 42 carries before suffering from a foot injury and missed the rest of the season. The following season, he rushed for 977 yards and 13 touchdowns and caught 20 passes for 349 yards and three touchdowns. Also, he was named Second-Team All-Sun Belt Conference.

During his junior season, he earned second-team All-Sun Belt after rushing for 1,147 yards and 16 rushing touchdowns. Overall, Mitchell played in 42 games and carried the ball 527 times in college for 3,267 yards with 41 rushing touchdowns.