Ed Marinaro is a retired professional American football player. He played professionally six seasons with the Minnesota Vikings, New York Jets and Seattle Seahawks, appearing in Super Bowl VIII and Super Bowl IX with the Vikings. Also, an actor, he is known for his role in Blue Mountains State and Hill Street Blues.

As of 2020, his net worth is approximately $3 million. With a tremendous net worth, he is living a lavish life together with his spouse, Tracy York, and their son: Eddie Marinaro.

Ed Marinaro Salary and Net worth

Former NFL star, Ed Marinaro has an estimated net worth of $3 million as of 2020. Upon his retirement as an American football player, he pursued his career in the field of acting. 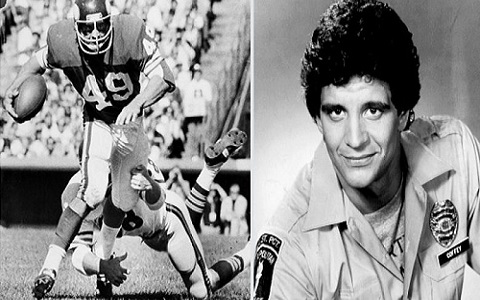 His most recent movie is Blue Mountain State: The Rise of Thadland where he portrayed the character, Coach Marty Daniels. However, his annual salary is under review.

ED Marinaro, 68, is a happily married man. He tied the knot with his girlfriend, Tracy York Marinaro on 31st December 2001. His wife Tracy is a fitness expert.

Together the couple is blessed with a son named, Eddie Marinaro.

Earlier, he was in an affair with his girlfriend Mimi Rogers. Besides this, there are records of his past affairs or children from extramarital relationships.

Ed Marinaro was born in the year 1950, on March 31 in New York City, New York, United States. His star sign is Aries. Talking about his nationality, he is an American, having a white ethnic background.

He enrolled at New Milford High School, where he played football for the high school team.  After finishing high school he attended Cornell University. At university, he set over 16 NCAA records. Moreover, he was the first running back in NCAA history to run for 4,000 career rushing yards and led the nation in rushing in 1970 and 1971 respectively.

In the 1972 NFL Draft, he was picked 50th overall in the second round by Minnesota Vikings. He played three seasons for the Viking appearing in Super Bowl VIII and Super Bowl IX. Further, he spent 1976 seasons with New York Jets and 1977 season with Seattle Seahawks.

He was not only limited to his football career, but he was also proficient in his acting career, he collected a huge amount of fans by his acting talents, after retirement from the football game, he enrolled himself into the acting career and appeared in a number of television series and programs.

He played the senior coach for three seasons on Spike TV’s comedy, Blue Mountain State. Ed has been a cast member for a number of television series, including Laverne & Shirley and Sisters. He joined the cast of Hill Street Blues in 1981 playing the role of officer Joe Coffey until 1986. He also appeared in the 2006 film named Circus Island.