North Charleston, South Carolina native, Earl Grant was born on 25th December 1976, under the star sign Capricorn. He went to R.B. Stall High School and finished his collegiate basketball career at the NCAA Division II level at Georgia College for two seasons. In 2000, he graduated with a bachelor's degree in psychology.

Earl Grant recently signed to the Boston College to become their new head coach. However, none has revealed the financial detail about the deal. Jim Christian, Boston's then-head coach made a total of $1.4 million per annum, hence, Earl is estimated to make the same figure at least over $1 million per season.

As of 2022, Earl Grant's net worth is estimated at $1.5 million. Besides, there is no information available regarding his real estate property or cars.

Earl Grant's Wife: Is He Married?

Earl Grant is a married man. He tied the knot with Jacci who is a 2001 College of Charleston graduate majoring in elementary education. Besides, there is not much information about his spouse. When did the couple met and tied the knot remains a big question today. The Grants couple has always lived their life low key but happy. 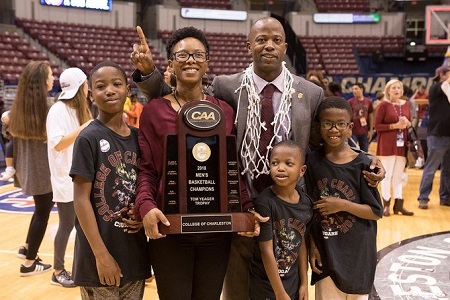 Earl Grant with his wife and children SOURCE: Twitter @CofCalumni

The couple is blessed with three sons: Trey, Eyzaiah, and Elonzo. Following the father's footsteps, the three boys play basketball.