Jeremy Ballard is the 9th head coach of the FIU Panthers men's basketball team in the United States. Recruiting, scouting, academic support, coordinating the film exchange program, directing regular summer camp events, and working with the guards in practice are all part of his coaching duties.

Jeremy Ballard's Salary & Contract: How Much Is His Net Worth?

Similarly, during his college time, he was given a lot of scholarships from his college as he was a valuable player. By the help was which, he was able to clear his bills.

The proud son of a white man, John Ballard, and a Black mother, Rita Ballard, Ballard received a lot of love. His parents have been married since 1980, after dating since 1975. Jeremy Ballard grew up attending basketball games at the schools where his father was a teacher, including Crim High School. Ballard, an Atlanta native, earned a bachelor's degree in English and a minor in theology from Colgate University in 2003. 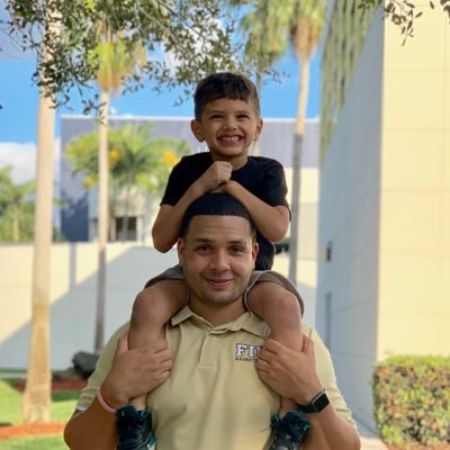 What's more, Jeremy is a married man. Together with his wife, he shares an adorable son, Khalif Jamal. The Ballard family is living happily together and enjoying their time with each other.

Ballard was a two-time Patriot League Academic Honor Roll pick during his college basketball career at Colgate, where he also served as team captain his senior year. While playing for his team in college, he was a guard.

He is a committed member of "the Commission," a young male mentoring organization that takes pride in growth in young men's highly competitive academic environments. Later, he wanted to guide more young players to have a bright future so he quitted his playing career.

Ballard returned to his alma mater as an assistant coach after graduation, serving from 2004 to 2007 before joining the Tulsa coaching staff from 2007 to 2012. Ballard went on to work as an assistant coach at VCU under Shaka Smart until 2015, after which he spent one season each at Illinois State and Pittsburgh.

In 2017, he returned to VCU as an assistant coach under Mike Rhoades before taking over as the head coach of Florida International on April 20, 2018, succeeding Anthony Evans as the program's ninth coach.

He was named the Patriot League Academic Honor Roll on two occasions and was named the team's best defensive player. He has been a great coach for his team as he has guided his team played quite well.