Dominic Breazeale is a professional American boxer who fought in the super heavyweight division as an amateur. Besides that, he also competed in the London 2012 Olympics. Further, as a professional Dominic is a two-times world heavyweight title challenger.

Although being a famous star, Dominic has kept his personal life low key. Besides, it is known that he is married to his long0time girlfriend, Christine. Well, want to know this professional boxer more closely? Then stick with us till the end.

Dominic Breazeale Net Worth and Earnings

Dominic Breazeale has an estimated fortune of $5 million. Besides, his recent fight against Deontay Wilder made him $1.5 million as prize money. The fight was one of the most awaited fights in the history of boxing.

Although the likes of Floyd Mayweather may earn $500 million for a couple of fights, most pro boxers struggle to make a living from boxing. Professional sports competitors earned a median salary of $51,370 annually in 2017, according to the Bureau of Labor Statistics.

Dominic Breazeale Personal Life; Know about his Wife and Children

Dominic Breazeale is married to his long-time girlfriend, Christine. Although being a celebrity, he has maintained a low key when it comes to his personal life. As a result, there is no information regarding when and how did the couple met each other. Further, there is also no valid information regarding their date of marriage. 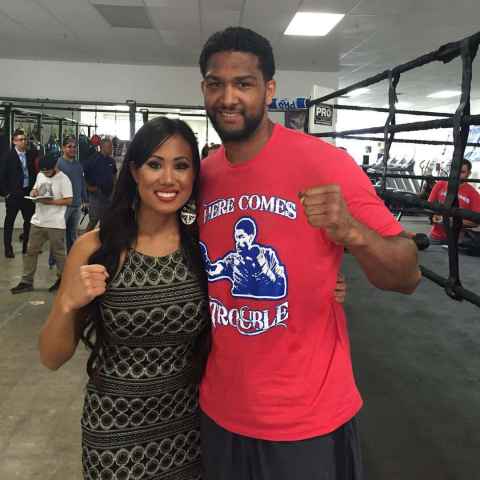 However, it is known that the duo is blessed with three kids. Two of his kids are named Devin and Deangelo Breazeale while the third one’s name is unknown. Dominic frequently shares pictures of his wife and kids on Instagram and thanks to them for being in his life.

Apart from that, Dominic has not involved himself in any kinds of rumors or controversy. Additionally, as the boxer is quite secretive about his personal life, it is also quite hard to say whether he was dating someone previously.

Dominic Breazeale stands at a perfect height of 6 feet and 7 inches tall (201 cm) and he has a bulky body that weighs about 100kg.

Dominic Breazeale was born on August 24, 1985, in Glendale, California, the U.S. as Dominic Angelo Breazeale. He started playing football at age and was a quarterback on the football team at the University of Northern Colorado before starting boxing.

Besides, Dominic holds American nationality and details regarding his ethnicity is yet to be discovered. Apart from this, nothing more is known about his early life and family background.

Breazeale first started boxing at the age of 23. As an amateur, Breazeale won the 2012 U.S. National Super Heavyweight championship at the Fort Carson Special Events Center in Colorado Springs, Colorado.

Breazeale made his professional debut on November 9, 2012, against Curtis Lee Tate. Breazeale won the fight by 1st round knock out. He fought again later that month, knocking out Mike Bissett in the second round. He went on to have multiple knocks out wins in 2013. On August 24, 2013, Breazeale fought Jamaican Lenroy Thomas. Breazeale knocked Thomas out in the 4th round.