Declan Rice is an English professional footballer currently playing as a defensive midfielder/center back for the English club West Ham United of the Premier League.  At the international level, he represents the England national team.

Rice was born in Kingston upon Thames, England on January 14, 1999. He previously represented the Republic of Ireland internationally at both youth and senior levels before starting to play for the Three Lions in 2019. He trained with the academy of Chelsea in 2006, as a seven-year-old.

Declan Rice's Net Worth and Salary

Rice reportedly earns a staggering annual salary of £156,000 with his weekly paycheck amounting to £3,000. He penned an agreement with West Ham United for a five-year contract worth around £780,000.

Some however projects, the Kingston-born center back is going to net over £3 million starting from the season 2021-22. This assumption started in the wake of Rice's interest among EPL giants like Manchester United and Chelsea. Expert hypothesizes Rice's monumental hike in salary is in part to Hammers's paranoia and subsequent strategy to secure their promising player in a long-term deal. 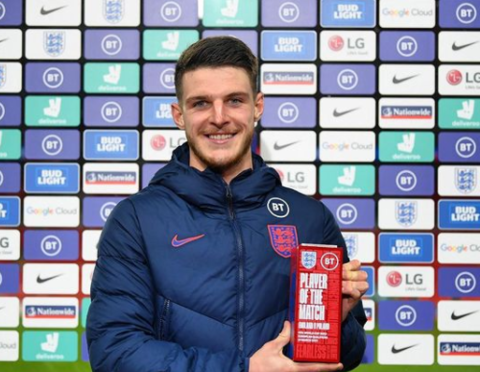 For the first season with the Cockney boys, Rice bagged a salary equal to around £40,000. In the next two editions, he saw a yearly revenue of £72,800 hitting his bank account. Amid the attention shown by the red devils and the blues, he was alleged to have had a hard bargain with the West Ham owners in terms of salaries and benefits.

As such, in 2019, reports swirled up among the football community stating the six-foot-one wall was set to receive £32,000 a week for guarding the Hammers' defense. Data proclaims his career earnings as of 2021 has hit more than £6milllion - exclusively from salaries. Taking that into consideration, analysts have theorized his net worth could very well be in the domain of £3 - £4million.

Does Declan Rice Have A Girlfriend?

When last reported by the Daily Star, Declan Rice was dating a Chessington native Lauren Fryer. On her 19th birthday, Rice through his Instagram had written: "Happy 19th birthday to my gorgeous girlfriend Lauren Fryer. Looking forward to making many more memories with you, I love you." When the center back won Young Player of the Year at the London Football Awards, Fryer, on her social media, wrote: "Couldn't be more proud of my Dec winning young player of the year. You deserve everything and more."

Back in November 2019, in an interview with The Sun, Rice revealed his girlfriend worries about his friendship with Chelsea's midfielder, Mason Mount. He said Fryer had complained about their bromance. It was reported that Mount and Rice had even ditched their baes to spend their holiday in Dubai.

Rice, however, hasn't been pictured with Fryer as of late. Nor the Hammers is being seen around blondie in his recent Instagram feeds. This has led his followers to wonder if he's done with his girlfriend. Though confirmations have yet to be made.

In 2014, Rice left the Blues' football institution for the academy of West Ham United. He received his first call up to the West Ham senior squad for the games against Sunderland and Everton in April 2017.

He though made his debut with the Hammers on the last day of the 2016-17 Premier League season. He was first chosen in the starting lineup on August 19, 2017, in a 3-2 defeat against Southampton. 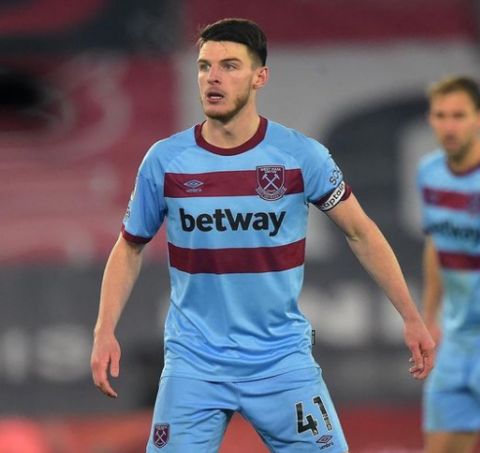 For his 2019-20 season performance, Declan Rice was named Hammer of the Year. SOURCE: Instagram

In April 2018, he was named as a runner-up for the 2017-18 West Ham Player of the Year behind Marko Arnautovic. On January 12, 2019, he scored his first goal for the Irons in a 1-0 win against Arsenal. The clash resulted in him being the man of the match.

On April 20, 2019, he was shortlisted for the PFA Young Player of The Year Award, which his England teammate, Raheem Sterling, eventually won. For his performance in a match against Arsenal, he was named Young Hammer of the Year in 2019 - this was his third consecutive title of such nature. In the 2019-20 EPL campaign, he appeared in all 38 league games for West Ham, playing every single minute.

That season, he made more passes than any other West Ham player and was in the Premier League's top five players for both tackles and interceptions leading West Ham players in both subjects. Consequently, he won the Hammer Player of the Year.

On February 13, 2019, he committed to play for the England national team. He first played for the team on March 22 in a match against Czech Republic - a qualification duel for the UEFA Euro 2020. He is set to play for England in the upcoming Euro 2020.