Marko Arnautovic is a well-known Australian professional football player. He has been playing in his professional career for more than fifteen years. Marko started his career in 2006 with Twente. Arnautovic currently plays for the Shanghai Port FC in the Chinese Super League. He wears a playing number seven jersey.

Marko Arnautovic was born on April 19, 1989, in Floridsford, Vienna. He is the son of Tomislav Arnautovic and his wife Gabriela Arnautovic. Marko has a brother named Danijel. Arnautovic stands six feet and four inches tall and weighs 83 kg.

Marko started playing football along with his brother at Floridsdorfer AC in 1995. He played with its youth team for three seasons and then moved to FK Austria Wine. In the next six seasons, Arnautovic moved to four more youth clubs before making his professional debut with Twente in 2006. In 2009, The Austrian player moved to Inter Milan on loan but moved to Weder Bremen in 2010.

Marko made his Bundesliga debut on August 21, 2010 against Hoffenheum.  He ended the 2010–11 season at the Weserstadion with five goals in 34 appearances. In March 2012, he was ruled out for two months with a knee ligament injury he suffered while playing with his dog. In September 2013, Arnautovic moved to Premier League club Stoke City on a four-year contract for £2 million. Marko finished his career with City playing in 125 matches and scoring twenty-two goals.

The Austrian player moved to West Ham United in 2017. In the next two seasons, He played in fifty-nine games and scored twenty-one goals. At the end of the 2019 season, Marko signed with Shanghai Port. Arnautovic has been playing with the club and has appeared in more than thirty games.

Marko started playing with the Austrian international team in 2006. In 2008, He was called for the senior national team. Since then, Arnautovic has appeared in eighty-eight games and scored in twenty-six games.

Marko is married to his longtime girlfriend, Sarah Lizakowski. The love birds walked down their wedding aisle in 2012. They had a private wedding ceremony where they invited only a few members from both the families and some close friends. 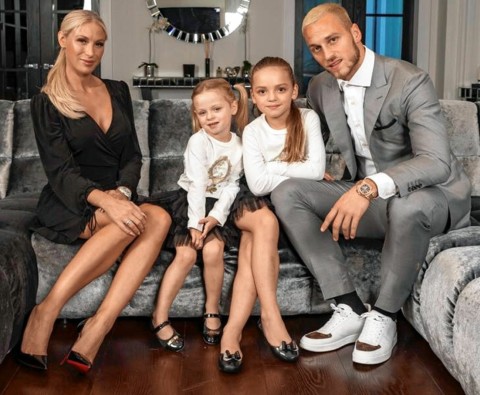 Marko Arnautovic and his wife with their children SOURCE: Pinterest

Shortly after the wedding, the duo welcomed two daughters Emilia and Alicia. The family of four is living a happy married life. It's been almost a decade since their marriage, and there have been no rumors of the couple having ups downs in their marriage life.

Marko Arnautovic's Salary and Net Worth

Marko Arnautovic has an estimated net worth of more than $20 MIllion. He has been earning millions from his contract in the Chinese League. Marko signed a £26,000,000 deal of five years with West Ham in 2017.

In July 2019, West Ham rejected an offer of £19.7 million from a Chinese club as Arnautovic said he wanted to leave. Instead, Marko signed for Shanghai SIPG for a fee of £22.4 million in 2019. He must be earning a considerable sum from his international career with his home nation.