Daniil Sergeyevich Medvedev popular as Daniil Medvedev is a Russian tennis player who has reached a career-high ATP singles ranking of world No. 4. The 23-year old player has seven ATP singles titles and two Masters 1000 titles and had reached in six consecutive tournament finals, including one at the 2019 US Open and three at Masters 1000 events.

Born on 11 February 1996 in Monte Carlo, Monaco, when he was 6 years old, he dreamt to become a professional tennis player and his family has made a big effort to try to get Daniil to the top of the tennis game and he turned pro in 2015.

In 2015 Kremlin Cup, Medvedev made his debut in the tennis and won his first singles ATP World tour against Horacio Zeballos in Ricoh Open 2016

Check Out How Wealthy Is Daniil

During the 27th Grand Slam final of the US Open with Rafael Nadal in 2019, he ended up being runner-up and received $1.9 million whereas the winner Nadal received $3.85 million.

Moreover, he also receives a good sum from his sponsorship and endorsement deals. Recently he signed a Sponsorship deal with BMW and is the brand ambassador of the brand. He is also linked to a deal with a Swiss watch brand, Bovet and received Bovet Ottantasei Tourbillon from the company. 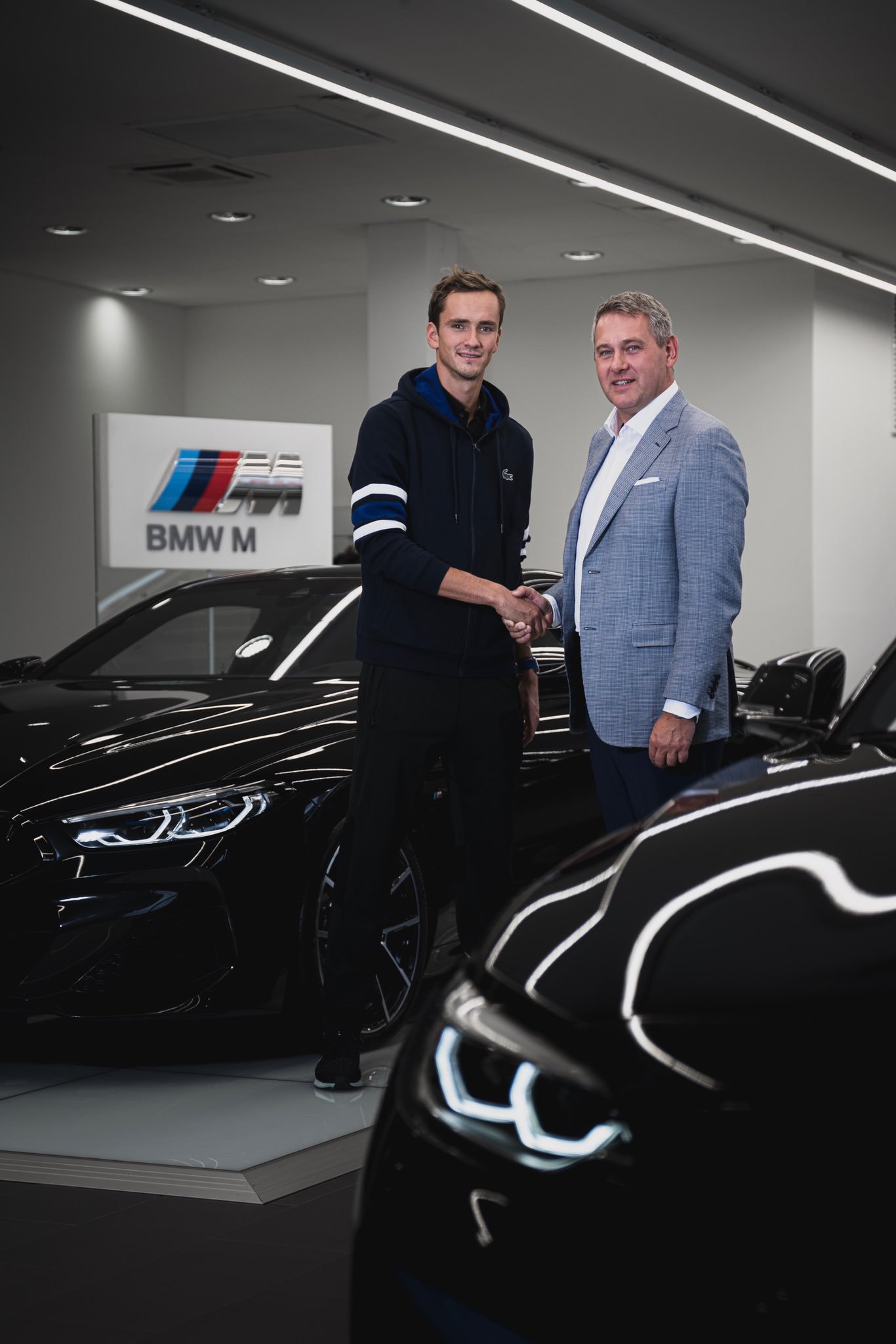 Besides, the Global sports equipment brand, Tecnifibre, sponsors Daniil Medvedev’s tennis racquets. 2019 has been a very good year financially for Daniil as he also joined with the sportswear brand, Lacoste ending his contract with Lotto Sports. He also endorses Tinkoff.

Daniil and Daria tied in a knot on September 12, 2018, after dating each other for four years. They both are Russian citizens hailing from Moscow and probably met each other in their college as they both attended Moscow State Institute of International Relations (MGIMO).

His spouse Daria later graduated from Lomonosov Moscow State University (MSU). Daria used to be a junior tennis player but she could not take her career at the top but she has proven to be an essential motivating factor in Medvedev’s tennis career. Medvedev appreciated his wife and revealed that his wife is his motivation and is the reason behind his success. In one of his interviews, he said:

“She is my biggest support and helps me in all aspects of life. She was a junior player and did not do too badly. She was in the top 100, maybe even higher, No. 50 or 60. She played till she was 18 and always believed that I could be in the top.”

Daniil Medvedev is the only son of Sergey Medvedev and Olga Medvedev and he has one sister whose name is Elena Medvedev. Rusian superstar's parents visa was not granted to watch their son's play at the ATP Finals against Alexander Zverev.

Daniil Medvedev competed at the ATP Finals on Nov 12, 2019 against Stefanos Tsitsipas, without the support of his family. The 23-year-old Russian qualified for the season-ending event for the first time in his career and was deafeated by Zverev in the round robin final game.

The 23 years old right handed player is considered as the future of tennis world because he has defeated many world class player in his early 20's. In 2017 at Wimbledon he defeated Stan Wawrinka who was then 3rd in the ranking. In 2019 at Montreal he beat Dominic Thiem who was at no.4 in tennis world ranking.

The same year in Shanghai he defeated Alexander Zverev who was at no.4 in tennis world ranking. Continuning his winning legecy he has also won match against Kei Nishikori. And recently he had won couple of matches against Novak Djokovic at Cincinnati and Montecarlo.

It was April 2019 when Daniil Medvedev entered the Rolex Monte-Carlo Masters by defeating Novak Djokovic who is one of the world's best tennis players and in the Semi-final match at Cincinnati Master something unexpected history was created.

Daniil Medvedev used to believe that Novak Djokovic will be out for revenge when they meet in the semi-finals on Aug17 2019 however Russian milestone beat the Siberian Superstar which was an astonishing win for him. The 23 year old star is ahead by 3-2 in the head to head record against Djokovic.

In Aug 2019 he won a match against Feliciano López and in the same match he faced Booo,Boo from the crowd and in response he said to interviewer “Your energy tonight give me the win,”  “Because, if you were not here, guys, I would probably lose the match, because I was so tired, I was cramping yesterday, it was so tough on me to play. So I want all of you to know, when you sleep tonight, I won because of you.”

Then he ignored the on-court interviewer’s next question and again he repeats “Again, the only thing I can say, the energy you’re giving me right now, guys, I think it will be enough for my five next matches. The more you do this, the more I will win, for you guys.”

And in the after-match press conference, he just delivered the statement which was unexpected for everyone, he said “I was an idiot, to be honest,” he said. “I did some things that I’m not proud of and that I’m working on to be a better person on the court because I do think I’m a good person out of the court.”

From that incident, Medvedev begins to considered as the antihero of the tournament which was a viral sensation for the tennis world.

Daniil Medvedev is tall and gaunt, who has a patchy mustache under his long, sharp nose and a scrappy goatee on his chin, twenty-three and his skills are becoming undisputed in court.

Medvedev is a world-class tennis player and besides tennis games, he loves to play computer games.

In one of his interviews, he said “My biggest hobby, it's something I don't exactly care to admit, it's PlayStation, I spend all my free time on it, so it's my biggest hobby and my favorite game is Fifa."

Right Handed Russian tennis player was praised by Indian PM Narendra Modi for his simplicity in the segment of his show 'Mann Ki Baat'. Modi appreciated the sportsman spirit of the world no. 4 after losing to Rafael Nadal in the US Open.

Modi was toughed by the speech of Medvedev her delivered after his loss where he showed maturity as well as simplicity. The Indian Prime Minister said:

"I hope you are aware that I am just as common a person like everyone else. Being an ordinary citizen, whatever affects you has the same effect on me as well. Hence I too heard the speech and watched the tennis match between Nadal and Medvedev. Sheer simplicity and maturity displayed by Medvedev touched everyone."