Sometimes life plays out like romantic movies, and so does Daria Medvedev and her husband's story. Besides, Daria first saw her husband when she was only 12 years old and at a tennis court too! Daniil Medvedev's wife likes to lead a life away from the limelight.

Daniil's wife also played tennis in the past. However, Daria didn't get to shine as a professional tennis player due to an injury. As such, Medvedev supports and cheers on her husband in every way possible. Speaking of which, learn about Daniil and Daria's marriage below!

When did Daniil and Daria Medvedev Marry?

Daniil and Daria Medvedev tied the knot on September 12, 2018. Besides Daniil's public post on his Instagram, Daria and her husband married in an intimate setting. Likewise, after the low-key wedding, Medvedev participated in the September Davis Cup. The couple remains blissfully married even after four years of wedlock. Furthermore, Daria and Daniil appear more in love than before their holy matrimony. Although Daniil gained a massive online following over the years, he respects his wife, Daria, who wishes to stay away from the spotlight.

Like any couple, Daria and her husband, Daniil, have troubles in their relationship. Moreover, Daniil appears to be a romantic at heart. In 2021, the Medvedev celebrated their third anniversary, and the tennis player forgot about his wife's gift. So, Daniil took to live TV and vowed to with the 2021's US Open for his wife.

Even after almost four years of wedlock, Daria and Daniil have yet to welcome a child. Moreover, currently, the 2021's US Open winner seems more intuned in furthering his career. And as a result, the Medvedev couple isn't parents to a kid.

Are Daria and Daniil facing any problems in their marriage?

So far, Daria Medvedev and her husband, Daniil Medvedev, aren't facing any problems in their married life. Furthermore, Daria and her long-time boyfriend turned husband share a solid marital bond. Likewise, the couple remains free of any extra-marital affairs.

The tennis star and his wife remain very loving and supportive. Similarly, Daria makes very few public appearances, but she is there to support her husband during Daniil's matches.

As we first mentioned, sometimes life plays out like a romantic movie, and the way that Daria Medvedev met her husband feels exactly like that. Moreover, Daria first saw Daniil Medvedev when she was twelve years old. What's more, the moment she saw her was when Daniil played tennis on the local court. On her rare public appearance, Daria told  Tatler Russia that she loved how Daniil played the game. Furthermore, Medvedev also stated that even today, her husband holds the same fire as he did back in the past. But as fate would have it, Daniil and Daria met once more later in the future.

After several years of their fateful encounter, Daria and Daniil met again in 2014. Moreover, the Medvedev duo started dating in 2014 as well. But, the husband and wife keep the details about their lives during that time hidden from the fans.

Daria and Daniil dated for years and finally exchanged their vows in 2018. Both the Medvedevs keep their past relationships out of the public's reach. And as such, the names of Daria's ex-boyfriends stay a complete mystery to the world.

Daria Medvedev works as a Model?

Daria Medvedev, like her husband, wanted to pursue a career as a tennis player. However, due to a severe yet mysterious injury, she abandoned her aim to become a pro tennis athlete. 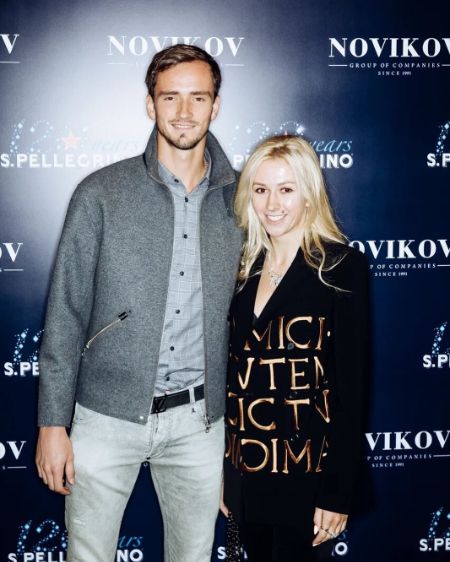 If sources are to be believed, then Daria currently holds a career as a model. However, it remains unknown which model agency she signed. And now, the former tennis player has an estimated net worth of $2 million.

Moving on to Daria's husband, Daniil leads a successful career in his field. Moreover, Medvedev holds around $20 million as his net worth. Likewise, the tennis star earned most of his wealth from endorsements. Daniil earned an estimated $8 million from endorsements alone in 2021.