Caleb Farley is a rising American football player. He has been playing with the Virginia Tech Hokies as a cornerback. Farley was named a first-team All-ACC after recording 20 tackles, four interceptions, and one touchdown in 2019. Farley has announced his name for th 2021 NFL draft.

Caleb Farley was born on November 2, 1998, in Maiden, North Carolina. He is among th two children born to Robin Farley and her husband, Robert. His mother passed away in January 2018 after losing the battle against breast cancer. He holds an American nationality and is of white ethnicity.

Caleb attended Maiden High School. It is here, Caleb started playing American football. In his early days, Farley competed in several sports but left all to focus on football. In his High School career, he had 10,425 total yards and 124 touchdowns. He was listed among the top players in the state. Several universities were interested in him, but he chose Virginia Tech.

Farley started training as a wide receiver with the University team but missed the season due to a knee injury. He made his return to the team as a cornerback. He finished the season with 36 tackles, two interceptions, and a sack. In the junior year, Caleb had an excellent season and was named a first-team All-ACC. He made a recording of 20 tackles, four interceptions, and one touchdown.

In 2020, Caleb was at the final stage of submitting his name for the 2020 NFL draft but skipped the 2020 season because of the coronavirus pandemic. He later started to focus on the 2021 NFL draft and take a gap year. In early 2021, The American football player has shortlisted his name for the NFL draft 2021.

Caleb seems to be single as of early 2021. He is an active social media user. Following his posts, It does not appear like he is dating someone. Caleb might be focused on his career rather than spending time with people. He remains busy training and likes to spend time with his family.

In his statement of taking out his name from the 2020 NFL draft, He mentioned that he did not want to lose any family member. Lately, Farley seems to be very much focused on his career. He spends most of his time in the Gym.

Caleb has an elder brother named Joshua. His parents met each other at the High School and married later. Talking about his physical appearance, Caleb is six feet and two inches tall and weighs 94 kg (207 lb). He recently graduated from Virginia Tech with a Bachelors's Degree in Communication Studies. 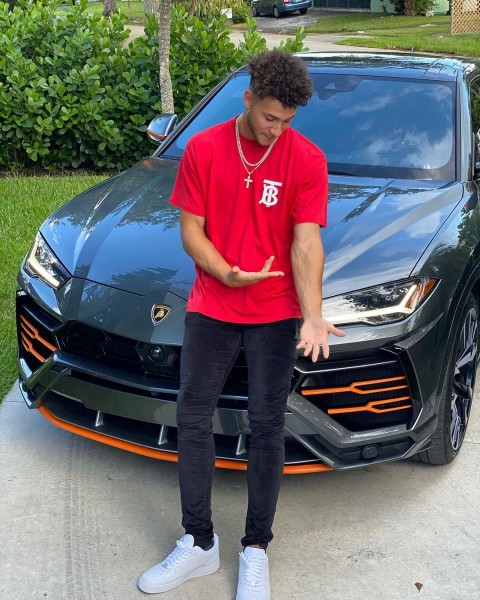 CAPTION: Caleb shares a photo along with his car SOURCE: [email protected]_farley

The American football player is very much early in his career to earn. He shall be landing a million from his contract and signing a bonus with the franchise in the 2021 NFL draft, along with several other players like Caleb Farley and Rashawn Slater.