Dillon Radunz is an American football offensive tackle for the Tennessee Titans of the National Football League. The 6 feet 6 inches tall athlete from Baker High School was drafted by the Titans in the second round in the 2021 NFL Draft.

Radunz was born on March 28, 1998, and grew up mostly in Becker, Minnesota. With Bakers, he won back-to-back state championships.

Radunz finished his high school career with 163 tackles including 14 sacks along with several accolades to his name. He was redshirted during his freshman year at the North Dakota State men's baseball team. He started 15 games as a redshirt sophomore and was named team All Missouri Valley Football Conference. 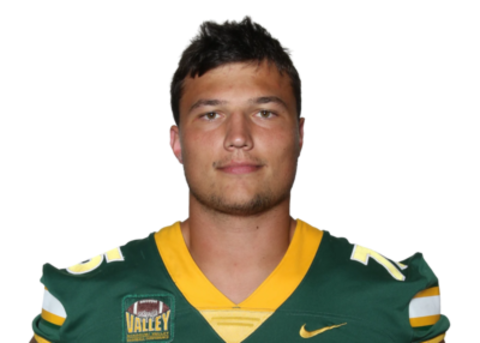 Dillon Radunz was drafted by the Titans in the second round in the 2021 NFL Draft. SOURCE: North Dakota State University Athletics

In his junior year, he played 682 snaps with 63 knockdowns and zero sacks in 12 regular-season games and started all 16 of the North Dakota State Bison Football's game. He was also named the first-team All MVFC and was selected to the first team All American. After announcing himself for the NFL Draft, Radunz played his final games for the NDSU at the 2021 Senior Bowl.

How Much Is Dillon Radunz Net Worth In 2021?

Given Radunz is just a rookie about to dip his toe into a billion-dollar sports franchise, the estimation of his net worth is still a story yet to be written. However, one cannot negate the fact that his wallet hasn't had an impact by signing with the Tennessee Titans who are reported to spend a whopping $250million on player expenses alone.

Worth knowing is the fact that the Titans generated its career-high revenue worth $422million in 2019, reports Forbes. While the term sheet of Radunz is yet to be disclosed, he is well projected to land some lucrative salaries for his second-round pick - ranging from $1,579,416 to $952,995 - as per Over the Cap.  Add to that, he is entitled to receive a four-year contract. These accords span between $5million (+ $1million signing bonus) and $8million (+ $1million in signing bonus).

Former Bison's no offensive tackle first introduced his girlfriend to his fans on March 31, 2020, through his official Instagram account. The post features a sandy brown-haired girl (yet still unidentified) by the offensive tackle's arm pictured somewhere in La Crosse, Wisconsin.

However, Becker's native didn't confirm if he had actually started dating this mysterious woman. Earlier this year, in January, the new member of the Titans made his status almost "taken" by posting short footage of the aforementioned woman strolling by the seashore- only this time, he inscribed this Instagram post with, "Thanks for coming out...I'd gladly walk the beach with you every night." 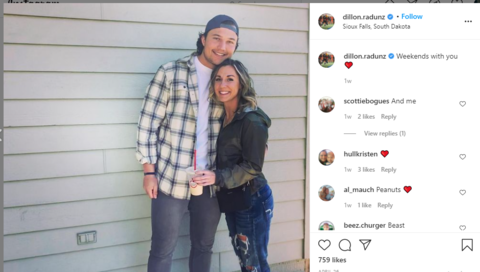 On April 26, 2021, it was crystal to fans that Radunz is taken for good. This time he shared the picture taken with the same lady and subtitled it with an infamous red heart emoji along with some writing that said, "Weekends with you."