Rashawn Slater is a rising American Football Offensive Tackle who plays for the NorthernWestern University Football team. Slater has been short-listed for the 2021 NFL draft, which is expected to happen shortly. Slater named first-team All-District as a junior and senior, second-team All-Greater Houston, and was rated a three-star recruit after his high school.

Rashawn Slater was born in the early 2000s. He has not shared his birth date with the media to date. Slater is among the two children born to Reggie Slater and his wife, Katie Slater. His father is also an American retired professional basketball. He also has a younger brother.

Rashawn started playing American football from his High School days. He was named first-team All-District as a junior and senior. After graduating from High School, Slater got scholarships from numerous universities like Illinois, Kansas, Wyoming, Rice but, he chose to remain with the Northwestern University.

In the first season, Rashawn got a chance to start 12 games from the right tackle position. He was named Big Ten Conference All-Freshman Team. Also, Pro Football Focus rated him as the best freshman offensive lineman. He started in 14 games in his sophomore year and was named in third-team All-Big Ten by the league's coaches.

In his senior, Slater was named into several teams. Most of the games in 2020 were halted due to the COVID pandemic so, He could not play many games. In early 2021, Rashawn placed his name in the name list of the 2021 NFL draft with several other players like Kwity Paye and Caleb Farley.

Rashawn is very much open about his relationship status. He is engaged to Stassney Grassney. The love birds have been together since 2016. This happy-looking relationship started as a friendship and did not take long to turn into a relationship. Both of them are active social media users and keep sharing each other's pictures. 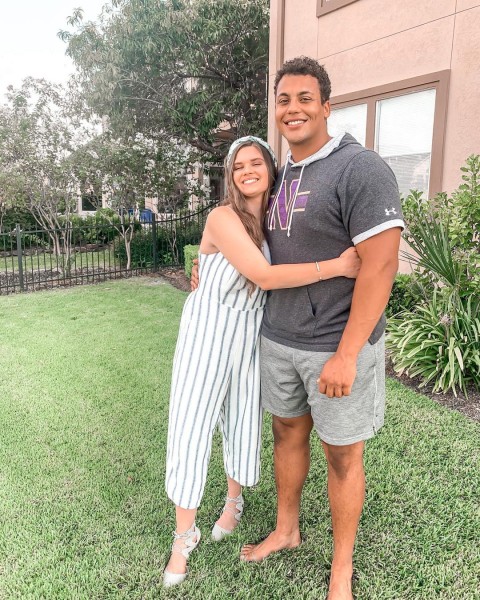 Rashawn graduated from Austin State University in 2020. The couple likes to spend their free time exploring nature and new places. Slater and Stassney got engaged on December 21, 2020. Rashawn kneeled in front of Stassney and asked for the marriage, and Grassney accepted the proposal without any second thought.

The love birds opened about the incident through a post on their Instagram with the caption," Words can’t express how much this woman means to me. Beyond excited to continue building with you, FOREVER!"

Rashawn enrolled at Northwestern University after graduating from Clements High School in Texas. Talking about his physical appearance, Slater is six feet and three inches tall and weighs 305 lb (138 kg).

Slater is very much early in his career. He is yet to earn to his own. He is set to be one of the highest signings in the NFL draft. As of now, Rashawn is living a happy life with his family.