Brian Castano is a well-known Argentine professional boxer. He is fighting in the professional ring for almost a decade. Brian turned professional in September 2012 and is yet to lose a single match in his career. Castano is the WBO light-middleweight since February 2021 and held the WBA interim light middleweight title from 2016 to 2018.

Brian Castano was born Brian Carlos Castano on September 12, 1989, in Isidro Casanova, Argentina. He is the son of Carlos Castano and his wife. His father was also a professional boxer and won a South American Games. Castano stands five feet and seven inches tall and weighs 70 kg. In 2021, Brian made $400,000 from his match against Patrick Teixeira. He also earned 50% of the PPV Share from the match. Castano is set to face Jermell Charlo, and He has a minimum guaranteed amount of $500,000 while his opponent has $1 Million and 55% of the PPV share. Castano will be making millions in the future.

Who is Brian Castano Dating? Know About His Wife and Relationship Status

Brian is a married man living a happy married life along with his wife. Brian tied his wedding knot with his longtime girlfriend, Carolina Cotugno. The love birds walked down their wedding aisle in April 2021. Although Castano is an active social media user, he rarely shares photos of his wife in his timelines. 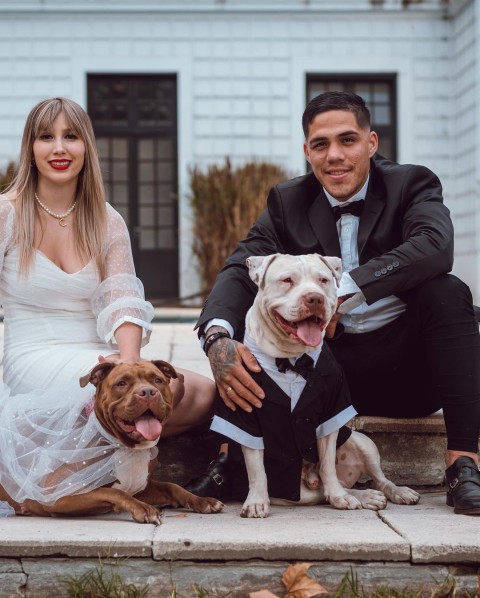 Brian along with his wife Carolina at their wedding SOURCE: [email protected]

Carolina is a model, and following her posts, we can be sure that They had been dating for more than five years before their marriage. The duo owns two dogs and treats them as their family members.

Brian started training with his father from a very early age. He finished his amateur career with a 181-5-5 record and won the South American Games gold medal. Castano made his debut in 2012 against Alejandro Antonio Dominguez and won the match via TKO in the fourth round. In the next four years, He fought in twelve matches and won all of his matches.

In November 2016, Brian got his first chance for a title match against Emmanuel de Jesus for the WBA interim light middleweight title and won the game. In the next three matches, He retained his match and also had a draw against Erislandy Lara. Castano won the vacant WBO Inter-Continental Light middleweight against Wale Omotoso in November 2019.

In February 2021, Castano won the WBO light-middleweight title against Patrick Teixeira. He is set to face Jermell Charlo for the WBA(Super) WBC, IBF, and the Ring light middleweight title.