Breanna Mackenzie Stewart a.k.a. Breanna Stewart is an American basketball player who plays for the Seattle Storm of the Women’s National Basketball Association (WNBA) as a Power forward/Center. She played college basketball for Connecticut and was picked 1st overall in the 2016 WNBA draft by Seattle Storm. She was named as the 2018's MVP by WNBA on 26th August 2018.

Stewart was born as Breanna Mackenzie Stewart on 27 August 1994, in Syracuse, New York, the United States. Her star sign is Virgo. She is an American and belongs to a white ethnic background.

Breanna Stewart's Net Worth in 2021; How much is her Salary?

Breanna Stewart has an estimated net worth of $1.4 million in 2021, including all of her properties and earnings. She is currently earning an annual average salary of $64,538, from her present club.

Being a good sportsperson, Breanna has a good number of sponsors and endorsements. Nike is one of the brands which have been endorsed by her.

With a successful career and many endorsement deals, Breanna Stewart is an economically sound athlete with good earnings from her basketball career. She has a good net worth and yearly salary, which is expected to increase in 2018 after she is named as the MVP because becoming an MVP means good sponsorship, more sponsors, and even prize money.

She owns a Maserati car for riding which is expected to be worth around $60,000.

Stewart is not married but is suspected to be in a relationship. There are rumors about her dating JayVaughn Pinkston, senior forward of Villanova. The rumors spread after Breanna and JayVaughn were spotted together in the LA Mystic games. However, neither of them has committed publicly about their relationship. 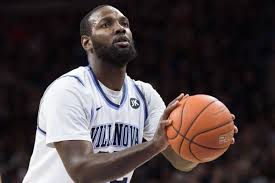 In case, the rumors about the affairs are not true, it won’t come out as a surprise because she never been in any affairs or boyfriends-related rumors before she was linked to Pinkston.

On the other side, Breanna Stewart has shared numerous pictures with a Spanish basketball player, Marta Xargay. 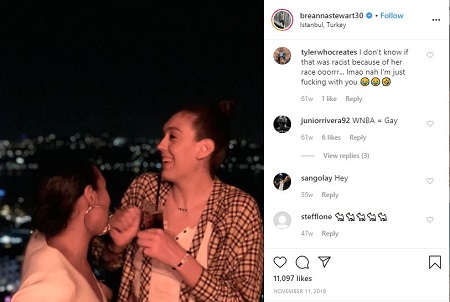 Now, she is suspected to be lesbian.

Many of her fans find it's hard to believe that she is single. Numerous, Mags, and tabloids consider Breanna as one of the most desired women. After, finding no suspects, or what so ever, some of her fans even suspect her to be into women.

Breanna Stewart recently made headlines after she joined the #metoo movement and opened up about the story of her sexual abuse by her aunt's husband while at a young age. She further went on to share how she positively took her body and height and made a career out of her athletic abilities and height.

Apart from basketball, Stewart can also be seen engaged in various charity works and events. Breanna Stewart stands with a height of 6 ft. 4 in. tall and weighs around 79 kg.

Breanna is the daughter of Brian Stewart and Heather Stewart. She is not the only child of her parents. She has two brothers named Connor Stewart and Alex Stewart.

She did her schooling at Cicero-North Syracuse High School. She was a player member representing her school where she used to play for head coach Eric Smith. Later, she enrolled at the University of Connecticut for her further studies. She continued to play basketball for the college.

Breanna started her professional career in 2016 where she was selected by Seattle Storm in the 2016 WNBA Draft. Her style of play has been likened to those of Cleveland Cavaliers forward LeBron James and Oklahoma City Thunder forward Kevin Durant.

She was named AP Player of the Year and is the only third person in the history of any college athlete sophomore to claim the honor. The other two sophomore recipients were UConn's Maya Moore and Oklahoma's Courtney Paris.

She also represented the United States in Women’s Basketball tournament in the 2016 Olympic along with other stars like Sue Bird, Lindsay Whalen, Seimone Augustus, etc. Further in August of 2018, she was named as the MVP in WNBA.

Stewart won the WNBA championship trophy with Storms in September 2018 and was also named the Finals MVP.