Athing Mu is a wising American middle-distance runner. She came to the spotlight after the 2020 Tokyo Olympics when she won a gold medal in the 800 meters at nineteen.  Mu won a second gold medal as part of the four × 400 m relay. Athing also holds numerous national records.

Athing Mu was born on June 8, 2002, in Trenton, New Jersey. She is among the seven children born to her parents. Athing has not shared a word about her parents.  Mu's father and mother hold American nationality while they are of South-Sudanese ethnicity. Her older brother Malual runs track and field at Penn State. After graduating from Trenton Central High School, Mu enrolled at Texas A&M University. Athing stands five feet and ten inches tall and weighs 56 kg.

Athing started training from a very early age. She started running track around age 6. Mu came to national recognition in 2018 after winning a Silver medal in the 2018 Youth Olympic Games in Buenos Aires. The following year, She won the gold medal for 800 m at the Pan American U20 Championships. In February 2019, The American athlete made a new national record at the 600-meter event at the 2019 USA Indoor Track and Field Championships with a time of 1:23.57. 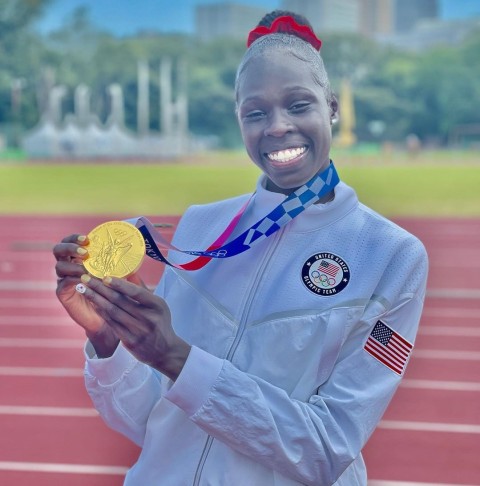 In April, Athing set the 800 meter USA collegiate record with a time of 1:57.73. In early 2020, She was named into the US Olympic team, and Jade Carey,  Simone Biles, but the game shifted until July 2021. At the Olympics, Mu won the gold medal at Women's 800 meters in the individual category. The American athlete was part of the 4×400 meter relay and won another gold medal at the event. Athing is very much early in her career and shall be appearing in numerous world events.

Athing has a huge fan following in her Instagram account. She is an active social media user and keeps sharing a lot of her pictures in her timeline. Her timeline is filled with photos of her training, games, and family. Following her timelines, we can be sure that Mu is living a single happy life on her own. 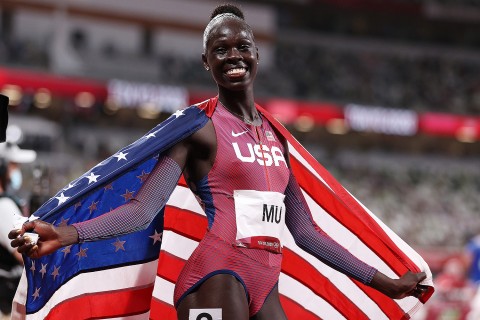 Athing celebrates after winning the gold medal in the Olympics SOURCE: People

Athing is very much early in her career and most probably at the peak of her career. She is very much concerned about making a bright future ahead. Mu is very close to her family and spends most of her free time with them.

Athing Mu has an estimated net worth of more than $100,000. An athlete earns a reasonable amount through their sponsors and advertising deals. Mu has a sponsorship deal with Nike, but the economic factor is not shared with the public. Athing will be receiving $75,000 as her prize money from the US government due to her two Olympic Gold Medals. She is very much early in her career and shall be making millions in the future.