Jade Carey is a well-known American artistic gymnast. Jade turned professional in 2018 and has won five gold medals in numerous international events. Carey is the 2020 Olympic champion in the floor exercise. She is a five-time member of the United States women's national gymnastics team.

Jade Carey was born Jade Ashtyn Carey on May 27, 2000, in Phoenix, Arizona. She is among the four children born to Brian Carey and his wife, Danielle Mitchell-Greenberg. Jade has three siblings. Her father works as a gymnast coach and is her head coach. Carey graduated from Mountian Ridge High School and committed to Oregon State University. Talking about her physical appearance, Jade stands five feet and two inches tall and weighs 50 kg.

Jade started training from a very early age. She began taking gymnastics classes in 2002 along with her father, Brian. Carey came to national recognition at the 2016 Junior Olympics Nationals. Shortly after, She was invited to her first elite-level national team camp in late 2016. Carey made her senior team debut in 2017  as a Level 10 gymnast. 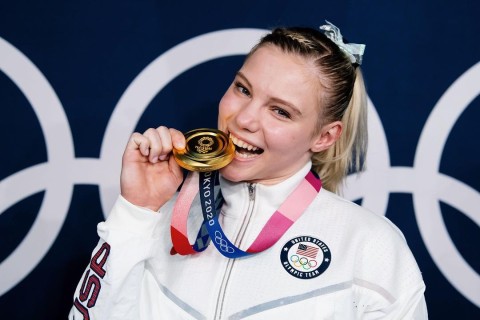 In July 2017, Jade made her elite debut at the American Classic at Karolyi Ranch. Carey competed on vault, floor, and balance beam but placed first in each event. In the 2017 U.S National Gymnastics Championships, The American gymnast won the gold on vault and silver on floor exercise behind Ragan Smith and made it to the national team for the first time.

Who is Jade Carey Dating? Know About Her Relationship Status and Boyfriend

Jade Carey's Net Worth and Earnings

Jade Carey has an estimated net worth of more than $200,000. She is among the best gymnast currently competing for the United States in International events. Carey must be making a handsome amount through her sponsorship and advertising deals. Also, Jade will be receiving $37,500 as her prize money for the 2020 Olympic Gold Medal. She is very much early in her career and shall be making millions in the future.