Nile Michael Wilson, aka Nile Wilson, is a former British artistic gymnast who has won several individual medals, including an Olympic Bronze medal in his active career. Moreover, he competed at the senior international elite level. He officially retired from gymnastics on January 14, 2021. The England international is one of his country's most respected and known gymnasts.

Nile Michael Wilson, the 2015 world Champion, was born on January 17, 1996, in Leeds, West Yorkshire, England. The athlete is currently 26 years old. Also, he is well-known by the nickname Wilsonator. Wilson has a youtube channel with more than 1,550,00 subscribers and shares vlogs related to gymnasts. Talking about his physical appearance, the Leeds boy is 5 ft 5 inches tall and weighs over 62 kg. 7

Nile Wilson, the 26-year-old athlete, is very loyal concerning his love life. The athlete is deeply in love with his long-term girlfriend, Sophie Brewster. The couple has been together for a very long time. However, they are still yet to get married. Sophie is one of the reasons behind his success in his gymnast career. Besides being his girlfriend, Sophie has been his guidance and greatest supporter in every step of his gymnastic career, which Nile is very thankful about. Young Nile and his Gf Sophie in 2015  SOURCE: Instagram

Moreover, on his Instagram account, he often shares their pictures, captioning his feelings toward her. Notably, they seem to have a happy relationship and are likely to marry soon.

Explore On His Net Worth And  Career Earnings

Nile Michael Wilson is one of the well-established gymnasts and a role model for many of his fans. He had outstanding career-capping several medals into his win streak. For your information, Nile has won 5 golds, three silver medals, one bronze medal in Commonwealth Championship, and one silver and gold in the European Championship, earning astronomical pay from his nation. The actual prize money he received is still under the radar. As per the sources, his active career earnings are believed to be $1 Million.

In addition, Nile is also a Youtuber with massive subscribers. From youtube, he also makes decent fortunes in his net worth. His present estimated net worth claimed by online sites is $750K. Not to mention, the American gymnast Grace McCallum is one of the wealthiest gymnasts in the world.

His Gymnastic Journey And Stats

Nile Wilson began his gymnastic journey in 2009. Before competing in Senior artistic gymnastics, he competed at the amateur level, winning the British Junior Champion and the British Junior Champion Young Sportman Male award at Leeds. Notably, Nile trained at the Machester Academy of Gymnastics. Likewise, in the 2014 Commonwealth, he represented England for the first time. He won the gold medal in team all-around, Horizontal bar, Silver medal in Parallel bars, and Bronze medals in Individual all-round. 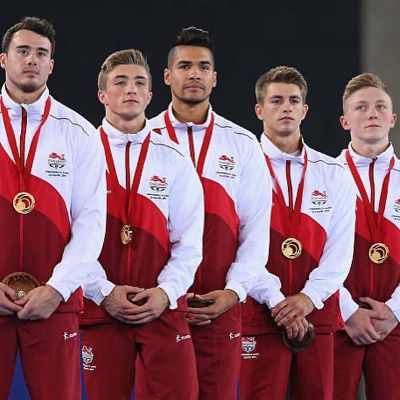 He became pretty popular after his first Commonwealth games. Later year, he contested in the 2015 World Championship and 2016 Summer Olympics. In the 2016 Summer Olympics, he clinched the Bronze medal in the horizontal bar. For your concern, the 2018 Commonwealth was his last appearance as an artistic gymnast. On January 14, 2021, he officially his retirement from gymnastics via his youtube channel.

Explore On His Family Facts

Nile Wilson came into this world as the eldest son of his parents, Sally Wilson and Neil Wilson. Both of his parents are of British nationality and practice the Christian religion. Further, the former gymnast is the nephew of famous cricketer Duncan Fearnley. Having fun with his father and sister  SOURCE: Instagram

He has a younger sister named Joanna Wilson, with whom he shares a strong bond. For his schooling, Nile attended Pudsey Grangefeild School.

Is He Active On Social Media Platforms?

Nile Wilson is a media-friendly person. Moreover, he is one of the famous British YouTubers who post videos regarding his workouts, daily life, and gymnastics. Likewise, we can easily access him on other social media platforms such as Instagram, Facebook, etc. However, compared to others, he is more active on Instagram. We can follow him on Instagram under the username @nilemw, which has 447K followers. We can learn more about his daily happenings and other information by exploring his Instagram handle.