Arthur Abraham is a well-known Armenian-German former professional boxer. He is among the only few german boxers to held multiple world championships in two weight classes. Arthur won the IBF middleweight title in 2005 and held until 2009 and won the WBO super-middleweight title in 2012 and 2014 until 2016. He won Senior light-middleweight Armenian Champion three times in the early 2000s.

Arthur Abraham was born Avetik Abrahamyan on February 20, 1980, in Yerevan, Armenian SSR. He is among the three children born to Sylvia Abraham and her husband, Grigor Abraham. Abraham moved to Germany with his parents and brothers in 1995 at the age of 15. He started his career as a cyclist and won the North Bavarian and Franconian Youth Champion. Arthur has a brother named Alexander, a professional cyclist in Germany and Christian Abraham owns a furniture shop.

Arthur Abraham must have earned a reasonable sum from his professional career in boxing. He played in the ring for more than fifteen years. Arthur has not disclosed his earnings and net worth to the public. He has an estimated net worth of more than $2 Million. The average salary of a professional boxer is more than $50,000. Abraham is a titleholder and must be quickly earning in six-figures. 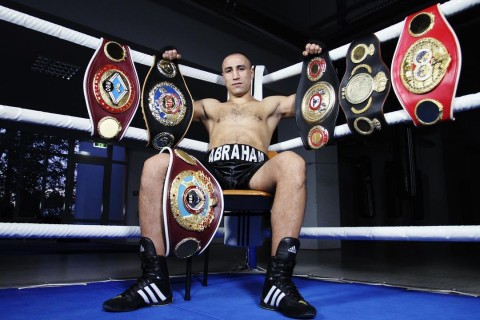 Arthur shares a photo of his titles SOURCE: [email protected]_Abraham_official

A professional boxer has several additional income sources than his/her salary, including Sponsorships, contracts, advertisement deals, pay-per-view, and several others. In 2013, Camp David sponsored Arthur's apparel wears. The boxer must be living a happy life through his successful career; He keeps sharing his lavish lifestyle.

Who is Arthur Abraham Married To? Know About His Wife and Children

Arthur is a married man. He is living a happy married life along with his wife and their children. Arthur tied his wedding knot with his longtime girlfriend, Mary Abrahamjan, in 2015. They had been dating for several years before their marriage. They had a private wedding ceremony in Yerevan where only a few members from both the families and some close friends attended the ceremony. 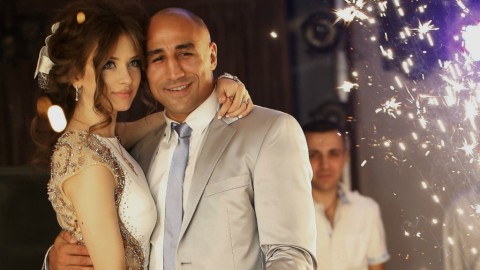 The wedding photo of Arthur with his wife SOURCE: B.Z Berlin

In early 2016, Arthur opened about expecting a baby soon. The duo was blessed with a son, Grigor, in September 2016. Arthur has become successful in keeping his personal life away from the media. There have been no rumors of the couple having ups and downs in their relationship.

Arthur finished his amateur career with 81-3-6 (48 KO). He made his professional debut in 2003 against Frank Kary Roth via a TKO. In 2004, He won his first title of vacant WBA Inter-Continental middleweight against Nader Hamdan. The following year, Abraham won another title of vacant WBA Inter-Continental middleweight title against Ian Gardner. Shortly, He won the IBF middleweight title and retained his title until 2009.

In 2010, Abraham lost his first professional fight against Andre Dirrell. He lost the match for hitting after a slip. In 2012, Arthur won his first WBO Title of super-middleweight title against Robert Stieglitz but lost the little in 2013. He won the title again in 2014 and retained it until 2016 and eventually lost to Gilberto Ramírez. The German boxer played his last game in 2018 and won the vacant WBO International super-middleweight title against Patrick Nielsen.