Jane Slater was born on November 7, 1980, in Rowlett, Texas. She rose to fame only after her successful career; so much about her parents and her early life is still under the radar. Slater graduated from Rowlett High School and enrolled at the University of Texas with a double majoring in Journalism and Government.

Jane Slater's Career as Journalist With ESPN And CBS Sports

Jane completed her undergraduate in 2004. She had a keen interest in journalism from a very early age. Also, Slater loved playing golf in her early days and had three unpaid internships and had a job while at school. Jane started working with radio stations as a radio talk show host and reporting for several news agencies. 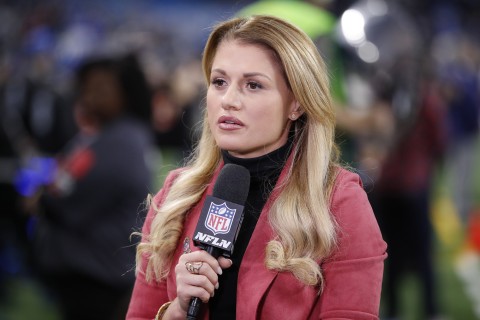 Jane covering up an NFL game after the show SOURCE: NFL

Slater worked as a reporter for eight years and joined KRLD-FM as their co-host of the show "Elf and Slater." Also, The reporter worked on the College World Series and college football bowl games for ESPN and the SEC Network. In October 2013, The reporter joined CBS 11 as their Sports Anchor/Reporter. The following year, Slater joined ESPN as their Studio Host/Reporter for Longhorn Network.

Jane has been working with the NFL Network since August 2016 as their Network Reporter. She especially covers the Dallas Cowboys. Slater is among the longest-serving reporters in the network. She has made headlines a few times for some of her comments.

Net Worth In Million

Jane Slater has an estimated net worth of more than $1 Million. She has earned most of her net worth through her successful career as a journalist for more than fifteen years. The average salary of an NFL reporter makes more than $52,000. Slater has been working with the media house for more than five years and must be made in a six-figure salary. Some of the top-earning broadcasters make millions as their salary.

Jane is very much private about her economic life. She is at the peak of her career and will be making millions in the future. Andrew Cooper is the richest and the highest-earning news anchor.

Who is Jane Slater Dating? Know About Relationship Status and Boyfriend

Jane has successfully kept her personal life away from the reach of media. Slater is an active social media user and following her timeline posts, it seems like NFL reporter, Jane is single as of late 2021. She has had some failed relationships in the past and has shared about it in an interview. Jane spends some quality time with her friend's SOURCE: Pholder

Slater mentioned that her boyfriend was having an extra affair with a senior editor working in the same company.